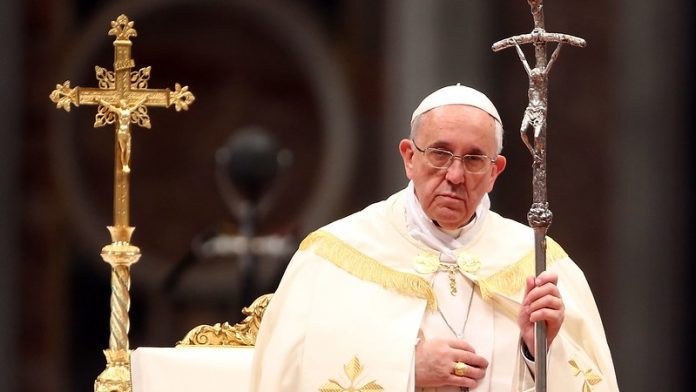 While on a weeklong trip to Europe, Secretary of State Mike Pompeo planned to sit down with Pope Francis during a visit to the Vatican. But the Catholic leader refused the photo ops and handshakes with America’s top diplomat out of one major concern: That he’d be a pawn in Trump’s reelection efforts.

“Yes, that is precisely why the pope will not meet American secretary of state Mike Pompeo,” Archbishop Paul Richard Gallagher, the Vatican’s secretary for relations with states, told Italian news agency Ansa on Wednesday.

That’s jarring, especially since the men met in person last October to discuss promoting religious freedom, even amid impeachment hearings in Washington.

First, Pompeo wanted to criticize the Vatican’s still-secret deal with China, agreed to two years ago, so instead, he used a speech in Rome on Wednesday to make his points publicly. “Nowhere is religious freedom under assault more than in China,” Pompeo said during a conference on religious freedom hosted by the US embassy to the Holy See, clearly directing his comments at Pope Francis. “We must support those demanding freedom in our time.”

It’s not a surprise Pompeo went after the deal. He’s led the administration’s fierce pushback against China and wants much of the world to follow suit. Plus, Pompeo has made promoting religious liberty a key issue during his time at the State Department.

Second, the 2020 US presidential election is just over a month away, and pictures of Pompeo and His Holiness smiling and chuckling could conceivably alter some Americans’ views on the current administration. Pope Francis, it seems, didn’t want to run that risk.

nd earlier this month, the secretary spoke at a Baptist church in Plano, Texas, about the role of faith while serving in government. However, he waded into the domestic battles that animate the presidential discussion today.

“We need to return to the founders’ central understandings about faith and how this Judeo-Christian nation is central to the world, and we must stand with it and we can’t let anybody try and rewrite history to suggest otherwise,” he told the audience. “It is an absolute imperative that we stand on these traditions and continue to build them up. It’s for our kids and for our grandkids. It’s absolutely imperative.”

These aren’t normal comments for a secretary of state — the nation’s top diplomat — to make, or normal forums for him to make them in. That’s why government ethics experts like the Brookings Institution’s Norm Eisen are concerned.

This all “appears to be part of a coordinated effort to showcase senior administration personnel in battleground states in close proximity to the election to benefit President Trump’s political interests rather than to serve the public interest,” Eisen told me last week.

There’s a further problem: “Pompeo’s politicking, especially in his official capacity, undermines his ability to represent the United States across the world,” said Donald Sherman, deputy director of the Citizens for Responsibility and Ethics in Washington (CREW), a watchdog group. “He’s either America’s chief diplomat or he’s a political crony for one political party.”

Pope Francis’s decision not to meet with Pompeo seems to make it clear which one the Vatican thinks he is.