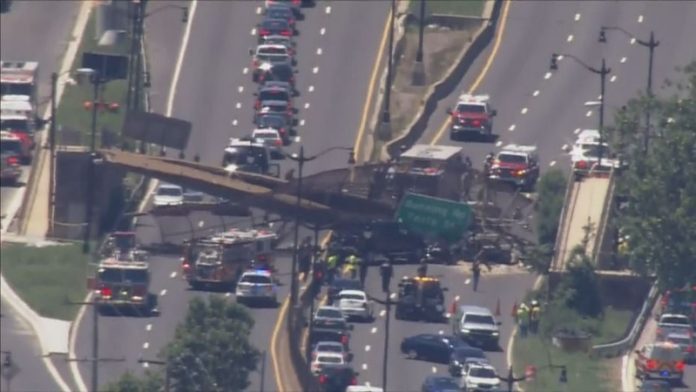 At least four people were injured Wednesday when a pedestrian bridge collapsed onto a busy highway in Washington, D.C., according to reports.

The collapse happened around noon and blocked all lanes of Interstate 295.

The bridge is located at the intersection of Kenilworth Avenue and Polk Street.

Photos of the accident posted to social media show a pile of concrete rubble on the road and mangled fencing that encased the elevated walkway. A sign for the Benning Road exit was visible from the road.

Two vehicles appeared to be underneath the wreckage, NBC4 reported.

At least one truck appears to have been severely damaged by falling debris.

Firefighters on the scene were checking for cars underneath the collapse, but no one was trapped, NBC4 reported.

Emergency officials said the extent of the injuries were only minor.

The accident caused a traffic backup that stretched for several miles in both directions, according to NBC4.

It was not immediately clear what caused the collapse.