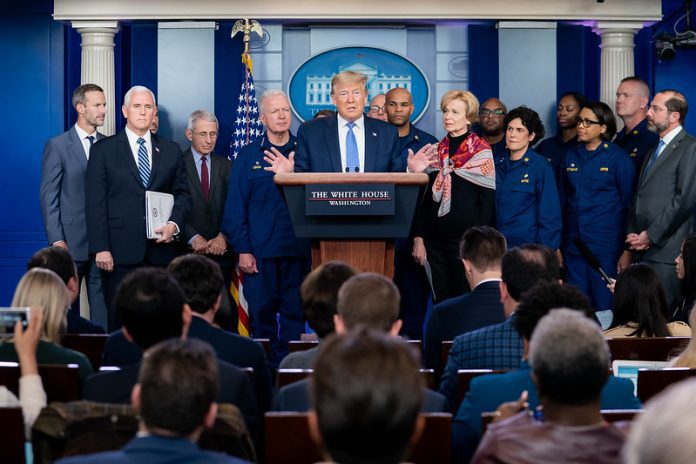 More than 120,000 people have signed a petition calling on news broadcasters to stop providing live coverage of the White House’s briefings on the coronavirus outbreak.

Accusing President Donald Trump of using each briefing as a “live campaign rally,” the petition, which has been published on MoveOn.org, asks CNN, ABC, CBS NBC, NPR, and Fox News to consider whether it is necessary to livestream the COVID-19 press conferences in full.

“President Trump is blatantly using the news organizations’ extensive, live coverage to freely campaign for a second term,” the petition claims. “It is wrong and dangerous to provide so much unfettered airtime to someone who is happily, shamelessly spreading terrible, damaging misinformation that is already costing fellow Americans their lives.”

Rather than broadcasting live coverage of the White House’s COVID-19 briefings, the MoveOn petition asks broadcasters to monitor the briefings instead “and have your anchors and correspondents quickly share appropriately edited valuable accurate parts.”

The “valuable accurate parts,” the petition states would be the statements coming “from medical experts.” Cutting out Trump’s own comments, the petition asserts, would “leave the President’s insults, false braggadocio and outright lies on the editing room floor, where they belong.”

“Please stop covering the President’s daily live campaign rally (thinly disguised as a coronavirus ‘news conference’),” the petition implores. “There is no need to do so.”

In the days since the petition was launched, it has quickly garnered support, gaining tens of thousands of signatures since three days ago, when it had just 10.

Speaking with Newsweek on Tuesday, Julie Rochman, a retired insurance industry executive who started the MoveOn campaign, said she was shocked to see the support it had garnered in just a few short days.

“This is the first time I’ve done something like this,” Rochman, who is in her late 50s, said. “I thought I’d get 100 people to sign it…And then it just sort of blew up.”

Frustrated by a constant struggle to parse facts from politicking in the White House’s coronavirus briefings, Rochman said she had initially sent out the petition to friends and family to see if they felt the same way.

However, as hundreds of people started to sign the petition, she said she started scrolling through signatories’ names and realized that, “all these people, I have no idea who they are.”

Rochman said that the surge in support for her petition should send a clear message to both the media and to the White House on how Americans are feeling about how critical information is being relayed to the public amid the coronavirus outbreak.

“This is not a time for politicking,” she said. With the November presidential election coming up, Rochman said, “I know it’s the ‘silly season,’ as we used to say in D.C., but it’s just not helpful. What people need right now is to feel well-informed and safe and not have somebody, anybody, spreading fear and misinformation and minimizing the impact of the virus.”

The former insurance executive said she wanted to make clear that she did not support censoring the president. However, she said that while the president should be able to “say whatever he wants,” news organizations “have an obligation to be objective and, as Fox News says, fair and balanced, and to report the facts.”

“When the president is shouting down reporters or insulting governors, or whoever, why do we need to hear the insults?” she questioned.

“If the president or vice president want to bring their gravitas and introduce people, fine, but the people giving us the actual information should be experts. And there are plenty.”

Others who signed Rochman’s petition appeared to agree, with one signatory writing: “Stop giving this tyrant free publicity that is also dangerous to the public.”

“All he does is lie and insult the people who actually are doing something constructive. He needs a Time Out,” another said.

While many appear to share those sentiments, Rochman said she has also faced a great deal of criticism, including a wave of hate mail in response to her petition.

“[People] started sending me emails, which is good and bad. People send nasty emails and nice and supportive emails,” she said. “It’s nice to know there are so many people out there who feel the same way I do.”

Addressing those who have sent “nasty emails,” Rochman said she believes “people are scared. And rightly so.”

“I’m really sorry that some people feel the need to email me nasty ad hominem attacks. I’ve been trying to respond with kindness. I just think people are scared.”

Ultimately, Rochman said, “I just want us to have the best possible information. All I’m saying is: can we just have the facts?”

In a statement sent to Newsweek, White House Deputy Press Secretary Judd Deere dismissed the petition, saying “the American people should not be surprised that a radical far-left organization like MoveOn.org that claims to promote equality and openness would rather not see this Administration provide accurate, up-to-date information on COVID-19 to the country.”

“Providing the public with as much information as possible right now is paramount and during these uncertain times, it is important that Americans hear from their President and top health experts,” Deere said.

In a briefing on Monday, the president took centerstage, responding to a question about why the U.S. was not testing as many people per capita as other countries by asserting that the U.S. was “very much on par” with other nations.

Further, Trump said: “Our testing is also better than any country in the world. And when you look at that, as simple as that looks, that’s something that’s a game-changer, and every country wants that. Every country.”

“So rather than asking a question like that,” Trump continued, admonishing the journalist, “you should congratulate the people that have done this testing because we inherited—this administration inherited a broken system, a system that was obsolete, a system that didn’t work. It was okay for a tiny, small group of people, but once you got beyond that, it didn’t work.”

Since the briefings began, there have been repeated calls for the White House to keep politics out of the briefings, with Scott Dworkin, the co-founder of the Democratic Coalition, being an outspoken critic of Trump’s involvement in the press conferences.

In a string of tweets on Monday, Dworkin called on broadcasters to stop airing Trump’s comments, with the hashtag “#StopAiringTrump”.

“I’m watching Trump’s press conference so you don’t have. Instead of watching, please let all networks know we don’t want a pathologically lying politician’s spin on coronavirus,” he wrote. “We want doctors talking about facts and science. Period. No more Trump propaganda.”

Speaking with Newsweek on Monday, Dworkin said it was his belief that Trump had already done enough damage by being slow to respond to the coronavirus outbreak.

“I think that his lies have killed Americans,” Dworkin said. “His downplaying [of the coronavirus outbreak] directly leads to Americans’ death and that’s one of the worst things that anyone has ever done as president, definitely in our lifetime. I think it’s going to be the biggest failure that’s ever existed in our lifetime.”

“We have had an abhorrent past with our leaders in this country, so there are worse things that have been done, but these lies and downplaying it and acting like everybody can go about their business and giving false hope… all of this is dangerous.”

“Now we’re here,” he said, reflecting on the fact that there have now been more than 164,700 confirmed cases of coronavirus in the U.S., with 3,173 cases resulting in death, according to an online tracker maintained by the Johns Hopkins University. “This is where we’re at and we just want doctors to be speaking. We want facts. We don’t need politicians on either side talking about coronavirus and briefing us daily. We need Dr. [Anthony] Fauci to be leading these things. He’s the only one who’s trusted by both sides, it seems. We just need the doctors to be speaking.”