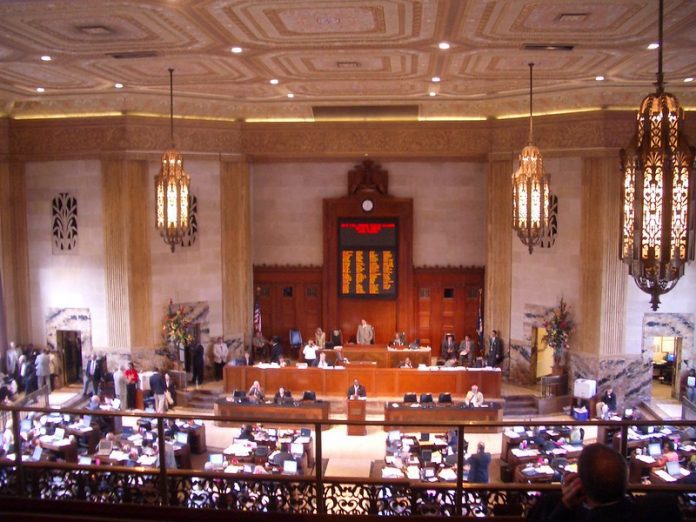 An emergency plan for Louisiana’s delayed spring elections was approved by the state Legislature after Republican lawmakers rolled back an expansion of mail-in ballots for people concerned about the coronavirus.

The state House and Senate both approved the revised plan, crafted by Republican Secretary of State Kyle Ardoin, even as a contingent of GOP lawmakers sought to block it because they believed it still featured too much access to mail-in ballots.

Lawmakers voted by mail on the emergency plan. The House approved it on a 62-to-39 vote and the Senate voted 31-to-8.

Following the vote, Ardoin called it a “pragmatic and temporary response” to the pandemic.

Ardoin originally worked with Democratic Gov. John Bel Edwards on the emergency plan, and settled on an expansion of mail-in ballots to those 60 or older, those subject to a stay-at-home order, those unable to appear in public due to concern of exposure or transmission of COVID-19, or those caring for a child or grandchild whose school or child care provider is closed because of the virus, among others.

Those reasons were stripped out of the new plan, which only applies to July and August elections, but could provide a foundation for the November presidential election. Under the plan that passed both chambers, people who would have access to mail-in ballots include those at higher risk because of serious medical conditions, those subject to a “medically necessary quarantine or isolation order,” those advised by a health provider to self-quarantine, those experiencing symptoms of COVID-19 and seeking a medical diagnosis, or those caring for someone who is subject to a quarantine order and has been advised to self-quarantine.

The revisions came after state Senate Republicans led by Senate and Governmental Affairs Chairwoman Sharon Hewitt, of Slidell, rejected the expansion of mail-in ballots, claiming it would invite fraud into the elections. That message, which was promoted by President Donald Trump, was also echoed by the Louisiana state GOP.

Fact-checkers, election experts, and studies have repeatedly shown the risk of fraud, including mail-in ballots, is extremely low.

Louisiana is among more than a dozen states to delay its elections amid the coronavirus pandemic, and New York went as far as to cancel its presidential primary. Alaska, Wyoming, Ohio, Hawaii are among the states that switched entirely or almost entirely to mail ballots for the elections. Several other states have expanded access to absentee ballots.

Louisiana’s spring elections, now slated for July 11 and August 15, were originally headlined by the Democratic presidential primary. While that is now settled, voters will also cast ballots in a host of local elections and party officials.

Edwards has expressed support for both iterations of the plan. But Democrats in the state Legislature have called for broader access to mail-in ballots for people concerned about the coronavirus.

Both Republicans and Democrats said they wanted to avoid holding elections like Wisconsin, which in early April moved forward with its presidential primary in the midst of a pandemic after the state’s Democratic governor and Republican Legislature failed to reach a deal on an election plan.

Some Republicans in Louisiana also worried that if they didn’t pass an election plan, the courts would decide how the elections would go, potentially involving a greater expansion of mail-in ballots than they want. In Texas, Republicans are battling in court over access to mail-in ballots during the pandemic.