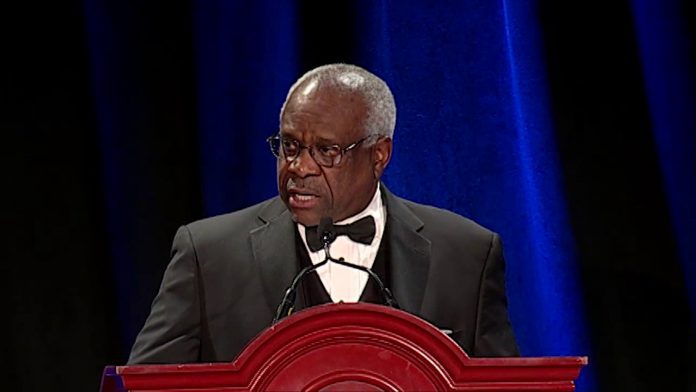 Obergefell v. Hodges was the landmark 2015 ruling in which the U.S. Supreme Court, in a 5-4 decision, legalized same-sex marriage in all 50 states. Two of the dissenters in that ruling were Justice Clarence Thomas and Justice Samuel Alito — and now, Thomas and Alito are calling for that decision to be overturned. This comes at a time when there is a very real possibility that Justice Amy Coney Barrett, a far-right social conservative nominated by President Donald Trump, will be replacing the late Justice Ruth Bader Ginsburg.

In a petition, Thomas and Alito argue that Obergefell was an attack on religious freedom, saying, “The Court has created a problem that only it can fix. Until then, Obergefell will continue to have ‘ruinous consequences for religious liberty.'”

Half a decade ago, the majority in Obergefell v. Hodges came from both the left and the right. Justice Anthony Kennedy, nominated by former President Ronald Reagan in 1987, sided with Ginsburg in that decision. Kennedy was fiscally conservative, yet his libertarian streak showed itself when he agreed with Ginsburg on social issues like gay rights, same-sex marriage, and abortion.

But the makeup of the Supreme Court has changed a lot since Obergefell. The late Justice Antonin Scalia, one of the dissenters in Obergefell, died in 2016 and was replaced by Justice Neal Gorsuch — another social conservative — in 2017. Replacing Scalia with Gorsuch wasn’t a game-changer for the high court, but when Kennedy announced his retirement in 2018 and was replaced by the more socially conservative Justice Brett Kavanaugh, that was a game-changer.

Now, with Barrett likely to replace Ginsburg, the Supreme Court is facing the possibility of an even greater game-changer — one in which Obergefell could be in danger along with Roe v. Wade, Griswold v. Connecticut, Lawrence v. Texas, and many other right-to-privacy decisions.

White House Considering Releasing Information About Trump And Jan. 6 Attack To Congress Despite...

Donald Trump Barbara Sobel - September 23, 2021
0
The White House is leaning toward releasing information to Congress about what Donald Trump and his aides were doing during the Jan. 6 attack...