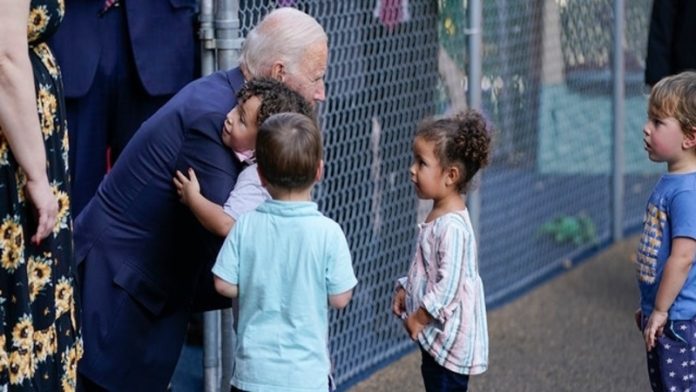 protesters hurling obscenities at President Biden while surrounded by children at Hartford event: ‘It was embarrassing.’

Connecticut Gov. Ned Lamont Tuesday ripped into protesters who hurled curses and vulgarities at President Joe Biden during a visit to a child care center in Hartford last week.

Four days after the event, Lamont was still clearly bothered by the protesters, who shouted vulgarities as about 35 children, along with their teachers, were meeting the president at an event touting additional federal money being earmarked for child care.

“It was something these kids will never forget for the rest of their lives,” Lamont told reporters Tuesday outside the state Capitol. “And right across the fence were angry protesters — yelling, cursing, dropping the F-bomb, and it was embarrassing.”

Lamont continued, “I contrast that moment with watching some of the eulogies for General Colin Powell. I heard him say this morning, as I was on the Stairmaster, that democracy and American democracy are the last great hope on Earth. We have many, many faults, but go out and fix those faults. Don’t curse the faults. Fix the faults. That’s what we’re trying to do.”

Lamont was appearing at a press conference designed to increase the turnout on Nov. 2 for local elections for mayor, first selectman, school board, and a wide variety of municipal offices. Citizens should take action, he said, rather than cursing.

When asked by a reporter why he decided to deliver his remarks about the protesters, Lamont responded, “It only happened three days ago, so it was fresh in my memory. It contrasted with the dignity of Colin Powell, who we didn’t always agree with, but who was an amazing American patriot.

“There’s been something of a coarsening of the political culture in this country. It comes and it goes, and I just thought it was worth stepping up and saying what I thought.”

Asked if Biden had heard the vulgar remarks and if he spoke to the president about it, Lamont said, “I did not talk to him about it, but you could hear it loud and clear on the playground at the daycare center.”