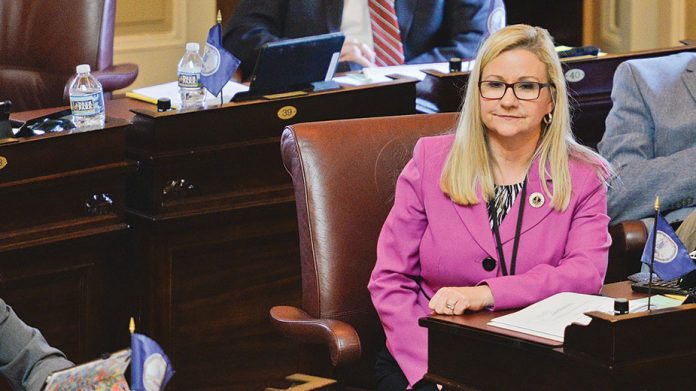 State Sen. Amanda Chase (R), a Republican candidate for governor in Virginia, called on President Trump to declare martial law to keep Joe Biden from being sworn in as the next president.

Writing in a Facebook post early in the morning on Tuesday, Chase said Biden is “not my president and never will be,” while linking to a New York Times story detailing how the Electoral College had certified Biden’s election victory.

She echoed Trump’s unsubstantiated claim that Biden had “cheated to win” and said she and many other Americans will “never accept these results.”

“Fair elections we can accept but cheating to win; never. It’s not over yet. So thankful President Trump has a backbone and refuses to concede. President Trump should declare martial law as recommended by General Flynn,” Chase wrote.

The U.S. has never declared martial law, which gives the military broad powers in a time of crisis, at the federal level. But it has been used on some instances at state and local levels during disasters or times of unrest, such as in Hawaii following the attack on Pearl Harbor.

It’s a legal grey area and any effort by Trump to use the military to overturn the election results would be immediately thwarted by Congress or the Supreme Court.

Trump’s legal challenges to the election have been broadly dismissed by the courts, including the Supreme Court. The president and his campaign have not been able to prove the wild accusations they’ve made on social media and cable news.

But Chase’s remarks reveal how a segment of Trump’s most fervent supporters insist the election was stolen and are proposing increasingly radical solutions to avert the outcome.

Chase says she’s working with pro-Trump attorney Sidney Powell “to expose what I and others believe is extensive fraud here in Virginia.”

Chase and Del. Kirk Cox are seeking the GOP nomination for governor in Virginia to replace outgoing Gov. Ralph Northam (D-Va.), whose term expires in November.

Northam defeated Republican Ed Gillespie by about 9 points in 2017. Biden carried the state by 10 points this year.

Coronavirus Barbara Sobel - July 28, 2021
0
Tensions between the party leaders in the House rose to a boil on Wednesday when Speaker Nancy Pelosi (D-Calif.) called her Republican counterpart, House...

Coronavirus Barbara Sobel - July 28, 2021
0
CNN reports A third dose of the Pfizer/BioNTech COVID-19 vaccine can "strongly" boost protection against the Delta variant -- beyond the protection afforded by...