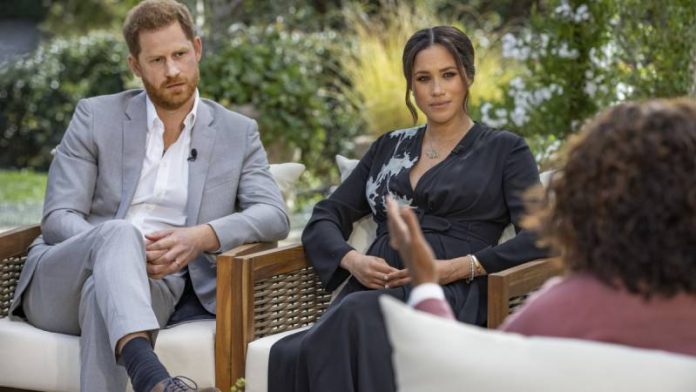 Meghan and Harry unleashed bombshell after bombshell in their Oprah interview that was sure to send shockwaves pulsing through the heart of the monarchy.

They made jaw-dropping claims of brazen racism and delved into difficult conversations of family rifts.

Although much of the interview was an outpouring of emotion, many of the claims can be stood up – or knocked down – with facts.

Meghan never researched the Royal Family prior to joining

Meghan’s claim that she never researched Harry, nor the Royal Family, before entering into the relationship is at odds with claims made in the couple’s biography.

Although the Sussexes maintain they did not contribute to Finding Freedom, it was written by friendly journalists Omid Scobie and Carolyn Durand, who say the book was impeccably well-sourced by those closest to the couple.

Prior to their first date at Dean Street Townhouse in 2016, the authors write: ‘Naturally both participants in this blind date did their homework with a thorough Google search. Harry, who scoped out Meghan on social media, was interested.’

A friend is also claimed to have impressed on Meghan the attention she would command for dating Harry, saying: ‘This could be crazy…you will be the most wanted woman’.

Meghan said: ‘You know, three days before our wedding, we got married. No one knows that… We called the Archbishop and we just said, ‘Look, this thing, this spectacle is for the world but we want our union between us.’

Church of England marriages require at least two witnesses and the public must also have unrestricted access to the building during any marriage ceremony to allow for valid objections against the marriage.

At the time the couple was living in the grounds of Kensington Palace, and their residence is off-limits to the public.

A couple who are already lawfully married cannot choose to re-marry each other unless there is some doubt as to the validity of the earlier marriage.

Reverend David Green, Vicar of St Mary’s, West Malling and the Rector of St Michael’s, Offham, said it was impossible to have had two weddings, adding: ‘I think the Archbishop needs to clarify what did or did not happen three days before.’

This means that one of the two ceremonies was more likely just an exchange of vows rather than a legally recognized wedding.

Archie has a birthright to be a prince

Meghan said: Idea of the first member of color in this family, not being titled in the same way that other grandchildren would be… It’s not their right to take it away’

Archie did not have a birthright to be a prince, but could potentially become one when Charles accedes to the throne.

That William and Kate’s children have the HRH title and are styled as prince and princesses – and Archie is not – stems from a ruling more than 100 years ago.

In 1917, King George V issued a written order that only royal offspring who are in the direct line of succession could be made a prince and receive HRH titles.

The Letters Patent read: ‘…the grandchildren of the sons of any such Sovereign in the direct male line (save only the eldest living son of the eldest son of the Prince of Wales) shall have and enjoy in all occasions the style and title enjoyed by the children of dukes of these our realms.’

Under the rules, only Prince William and the Duchess of Cambridge’s eldest son Prince George – as a great-grandson of the monarch down the direct line of succession to the throne – was originally entitled to be a prince.

The Queen stepped in ahead of George’s birth in 2013 to issue a Letters Patent to ensure all George’s siblings – as the children of future monarch William – would have fitting titles, meaning they were extended to Charles and Louis.

Under the George V rules, Archie would be entitled to be an HRH or a prince when his grandfather Charles, the Prince of Wales, accedes to the throne.

Meghan said: In those months when I was pregnant, all around this same time, so we (had) the conversation of he won’t be given security, he’s not going to be given a title.

Being a prince or princess does not automatically mean royals have police protection.

Princess Beatrice and Princess Eugenie’s security is no longer paid for by the taxpayer.

Harry and Meghan no longer receive British police protection and are understood to be paying for private security.

Kate made Meghan cry before her wedding to Harry

Responding to claims that she reduced Kate to tears, Meghan said: ‘No, no. The reverse happened’.

Reports of a pre-wedding clash between the duchesses first emerged in November 2018, when sources claimed Meghan had been left displeased with a ‘stressful’ dress fitting for the flower girls.

Accounts differed as to the source of the row. Some said it was a disagreement on whether the bridesmaids should wear tights – Meghan reportedly believed they should not.

Other reports said it stemmed from Princess Charlotte’s dress not fitting, meaning another had to be scheduled.

A source said at the time: ‘Kate had only just given birth to her third child, Prince Louis, and was feeling quite ­emotional.’

But during the Oprah interview, Meghan flatly denied the reports and claimed it was Kate that left her upset.

The couple witnessed racism inside the monarchy

Meghan said: [There were] concerns and conversations about how dark his [Archie’s] skin might be when he’s born’

Harry and Meghan said they will never reveal the person who made these comments.

However, Oprah revealed that Harry confirmed it was not the Queen nor Prince Philip.

While currently not commenting on the contents interview, Buckingham Palace is almost certain to push back on suggestions of institutional racism.

They could launch an investigation – as they have done with claims of bullying.

Harry was financially cut off from the royals

Harry said: ‘My family literally cut me off financially, and I had to afford security for us’

Fact check: They wanted to be financially independent

When Harry and Meghan announced their intention to step back from being senior royals, they said they wanted to be ‘financially independent’.

Before cutting ties, 95 percent of their money came from Prince Charles’s income from the Duchy of Cornwall, and 5 percent from the taxpayer-funded Sovereign Grant.

Princes William and Harry received most of a £13million fortune left by their mother Princess Diana. Harry is also thought to have had millions left to him by the Queen mother.

Meghan has not seen Samantha Markle in almost 20 years

During the interview, Meghan distanced herself from her half-sister Samantha, who she said she hardly knows and she grew up ‘an only child’.

A photograph from 2008 – 13 years ago – shows Meghan with Samantha at her graduation.

Meghan had to turn over her passport, keys, and drivers license to royal aides

Meghan said: ‘When I joined that family, that was the last time I saw my passport, my driving license, my keys – all of that gets turned over.’

Senior royals are often pictured driving themselves and it is believed there have never been prior claims of a royal having keys and passports held.

Oprah asked Meghan about stories that she made Kate cry, saying: ‘So, all the time the stories were out that you had made Kate cry, you knew all along, and people around you knew that that wasn’t true.’ Meghan replied: ‘Everyone in the institution knew it wasn’t true.’ And Oprah then said: ‘So, why didn’t somebody just say that?’ Meghan said: ‘That’s a good question.’

Making a wider point, Mail on Sunday royal correspondent Emily Andrews has said that Meghan’s press team did in fact defend untrue stories, saying this was ‘just not right’.

Andrews said that she interacted with a press team who defended the Sussexes ‘again and again and again, told me things were wrong – so didn’t publish – and indeed tried to stop me when true.’