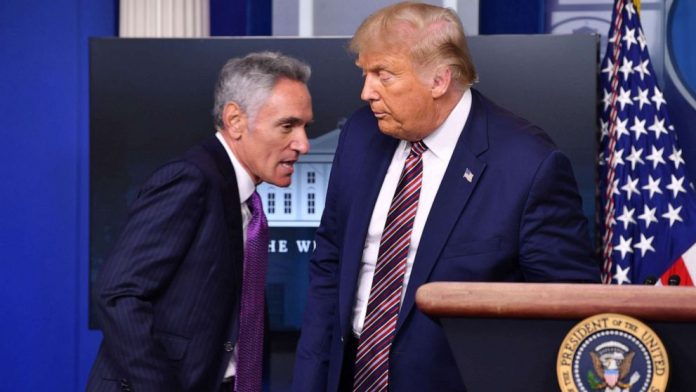 The director of the Centers for Disease Control and Prevention (CDC) was overheard on a phone conversation aboard a commercial flight saying a lead member of Donald Trump’s coronavirus taskforce has been spreading misinformation about the pandemic.

Dr. Robert Redfield was overheard by an employee of NBC News on a flight from Atlanta to Washington. According to NBC, Redfield criticized Scott Atlas, a radiologist, and Fox News talking head added to the task force last month.

“Everything he says is false,” Redfield said about Atlas, NBC reported. Redfield later confirmed he had been talking about Atlas.

Confirmed deaths from Covid-19 in the United States have passed 200,000 and the number of cases has passed 7m.

Atlas, who has no background in infectious diseases but who appears to have the best current access to Trump of any medical adviser, has been frequently criticized by the scientific and medical communities for offering what public health professionals say is bad advice about coronavirus.

Atlas has misleadingly called into question the efficacy of masks and social distancing, has echoed Trump’s call for reopening schools, and perhaps most controversially has supported the purposeful contraction of the virus by young people to create so-called “herd immunity”.

Public health experts warn that the viability of a “herd immunity” against coronavirus without a vaccine is unknown, given uncertainty about levels and duration of immunity in individual cases. They also say that achieving “herd immunity” would involve millions of infections and unknown thousands of cases of serious illness and death.

Atlas is a former Stanford medicine professor and a senior fellow at the conservative Hoover Institution at Stanford University.

His controversial statements drew an open letter from 78 former colleagues at Stanford medical school, who warned that his advice was dangerous.

“Many of his opinions and statements run counter to established science, and, by doing so, undermine public-health authorities and the credible science that guides effective public health policy,” the letter said.

Asked to respond to Redfield’s comments, Atlas told NBC News: “Everything I have said is directly from the data and the science.”

In the judgment of Redfield and other specialists, that is not true. The CDC said NBC News heard only “one side” of Redfield’s conversation, but did not dispute the report.

“NBC News is reporting one side of a private phone conversation … overheard on a plane from Atlanta Hartsfield airport,” the CDC said. “Dr. Redfield was having a private discussion regarding a number of points he has made publicly about Covid-19.”