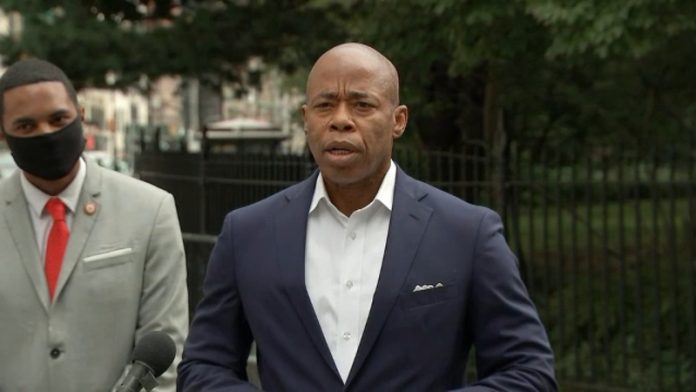 Democratic mayoral candidate Eric Adams said Monday that Rep. Alexandria Ocasio Cortez’s “tax the rich” dress is the wrong message for New York City while acknowledging he and the left-wing member of Congress are broadly aligned in their humble backgrounds and preferred outcomes.

“I’m a big believer that you know, I think, AOC, and I believe we both want the same things, we just have different pathways to get there,” he said on CNBC when asked about the controversial outfit she wore to last week’s star-studded Met Gala. “Her mother was a domestic worker, or did things on that level, [and] so was my mother.

“But when you talk about just blanketly saying tax rich in this city, we may have 8 million people, but 65,000 pay 51% of our income taxes,” Adams added in his response to the lefty lawmaker’s controversial getup. “And if you say to those 65,000 to leave, then we’re not going to have the firefighters, the teachers, all of those basic things.”

Instead of impulsively advocating for raising taxes on rich Big Apple residents, Adams said the city should first find ways to trim fat in the city budget and then assess if they should be hiked to bring in more municipal cash.

“Let’s find a way to use the tax dollars, we’re wasting tax dollars,” said Adams, the heavy favorite to win the general election in November, on CNBC’s “Squawk Box.” “Those tax dollars are being wasted.”

“I say, let’s make sure we get our house in order through our agencies. And then, let’s talk about how much money we need to run this city’s $98 billion budget,” he added. “And how much of that are we hemorrhaging?”

Meanwhile, Adams continued to create rhetorical distance between him and current Mayor Bill de Blasio on his posture toward big businesses, pledging to “reset” his relationship with the five borough’s well-to-do elites.

“Think about this for a moment: we are the only country on the globe that we have a dream attack while you don’t have a French dream, a German dream. You have an American dream. We are hardwired to start a business,” the Brooklyn borough president said on the financial news network.

“We’ve lost that along the way. So, I’ve been spending the last few years talking to my business leaders and stated, if I’m fortunate enough to become mayor, we’re going to hit reset, and we want to establish that relationship.”

His comments come after on Friday the cop-turned-politician decried what he characterized as a hostile approach the city has taken on businesses during de Blasio’s time in office.

“Right now, no one wants to do business in the city,” Adams said on Bloomberg Radio. “We have been defined as a business-enemy city instead of a business-friendly city.”

Earlier in the week, Adams promised a pro-business era at City Hall while speaking to a crowd of financial services industry professions.

“New York will no longer be anti-business,” Adams said at a yearly gathering of the finance, tech and policy cognoscenti the Javits Center. “This is going to be a place where we welcome business and not