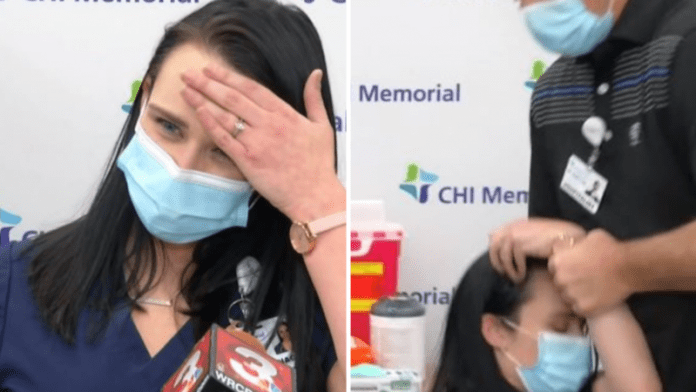 For weeks now, commenters have flooded Tennessee nurse Tiffany Dover’s Facebook wall with messages of tribute, praising her kindness and beauty and offering their condolences for her loss.

There are more than 22,000 comments on her last Facebook post, from people around the world—a collective grieving and outpouring of anger for the 30-year-old mother of two.

But Tiffany Dover is not dead.

According to all official sources, she is alive and well and working as a nurse at CHI Memorial Hospital in Chattanooga. Last week, she was pictured on the front of the local newspaper caring for a north Georgia police chief who had been in the hospital for nearly 100 days.

Dover is not the victim of some medical mishap, as her mourners allege, but of a massive global conspiracy theory that has united anti-vaxxers and COVID skeptics in a dangerous attempt to prove themselves right.

The outcry started in mid-December when six staff members at CHI Memorial Hospital were selected to receive their first dose of Pfizer’s COVID-19 vaccine on live TV. Dover, a nurse manager at the hospital, was one of them. Speaking with reporters that day, she called the vaccine a symbol of hope, a light at the end of a very dark tunnel. 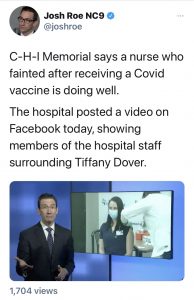 In the video, Dover can be seen getting the injection in her left arm, her deep-set blue eyes shining over the top of her surgical mask. A few minutes later, she stands to take questions from reporters, then stops and puts her hand to her head. She tells reporters she feels dizzy. Then she sinks slowly to her knees. Two other employees rush to her side to catch her before she hits the ground.

Minutes later, Dover is back on her feet, telling television cameras that she suffers from a medical condition that makes her prone to fainting. “I have a history of having an overactive vagal response, and so with that if I have pain from anything—hangnail or if I stub my toe—I can just pass out,” she said.

It was a dramatic moment with a simple explanation: a common and largely benign medical condition that affects some 20 percent of the population. But for vaccine skeptics, it was all they needed to construct a vast conspiracy—and incite a targeted harassment campaign that shows no signs of stopping.

It’s hard to pin down where, exactly, a conspiracy theory starts. It derives power from being seemingly everywhere at once, simultaneously unprovable and unimpeachable. But what we know about the Tiffany Dover conspiracy theory is this: Someone deceptively edited the video of her vaccination to make it look like she had died, leaving out the footage of her post-recovery interview. The video circulated on anti-vaxx Facebook pages and other social media accounts, accruing enough critical mass that by the time people got the facts, they weren’t interested in them at all. They were convinced a nurse had died, and they were going to get to the bottom of it.

In the days following the broadcast, commenters from around the world flooded CHI Memorial’s social media pages and even called the hospital, demanding proof that Dover was alive. Others sought out her friends and family, posting on their walls and Instagram pages demanding information. As evidence, they circulated screenshots of what they said was Dover’s death report on SearchQuarry.com—a website that will give an identical, similarly morbid result to anyone who enters their name.

By Dec. 19, the uproar was so intense that the hospital was forced to issue a tweet saying that Dover was “home and doing well” and asking for privacy for the nurse and her family. That tweet, too, was flooded with comments. “Send a picture of her with a newspaper of the day,” one wrote. “I want to see a video of her talking about it,” said another. (This according to screenshots taken at the time; the hospital’s account has since been made private.)

With the conspiracy theorists only getting louder, on Dec. 21 the hospital took the extraordinary step of releasing what was essentially a proof-of-life video. The 20-second clip shows Dover standing on a staircase in the hospital, surrounded by other nurses holding signs with the day’s date and the hashtag “CHIMemorialStrong.” In a statement at the time, a hospital spokesperson said CHI was “aware of the multitude of false information circulating on social media about Tiffany Dover,” and had shot the video to “clear up many of the circulating rumors.”

Of course, it did nothing of the sort.