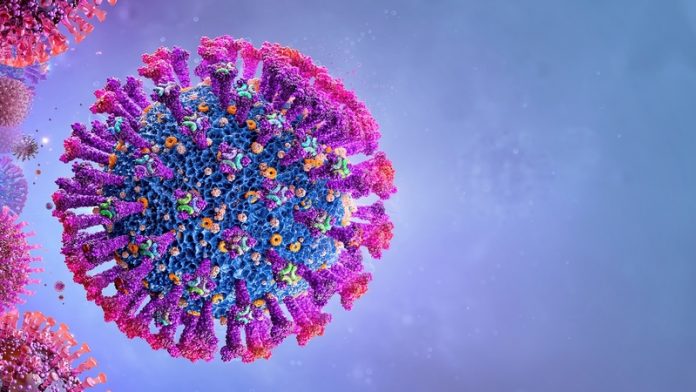 Ever since the delta variant of the coronavirus exploded in India in the first half of 2021 and now around the world, researchers have been trying to understand what makes this particular SARS-CoV-2 strain so transmissible.

Now, they’re narrowing down the reasons to a few important mutations on the spike protein that seems to help the virus get into cells quicker than ever. One such mutation, called P681R, may make a crucial step in this process go faster. Another, called D950N, might change the structure of the spike protein so that it’s more poised to alter its shape to fuse with a human’s cells.

“The bottom line is this delta virus is more efficient,” said Gary Whittaker, a professor of virology at Cornell University, who specializes in coronaviruses. “It fuses faster and enters cells faster and presumably that translates to generally more efficient transmission overall in the population.”

Faster fusion
From a public health perspective, these changes mean vaccinations are more important than ever, as they reduce infection risk and drastically reduce severe disease. Delta’s efficiency at infection means that people who catch the virus can have a high viral load, even after vaccination, and so mask-wearing is critical where viral transmission is high.

From a scientific perspective, it’s important to understand how the virus is evolving to get better at infecting humans. This can inform predictions about what new variants might arise and if there is an upper limit on the virus’s transmissibility.

The science is still emerging, and most of the research on delta mutations is not yet peer-reviewed. Studies published on the preprint website bioRxiv, however, suggest that mutations have reworked one particular region on the spike protein, improving something called the furin cleavage site.

Binding locks the virus onto the target cell. But it also has to get in. To do this, the membrane surrounding the virus has to fuse with the cell’s membrane, allowing the virus to dump its genetic material into the cell. This fusion process requires the spike protein to change shape and expose new molecules to the cell surface, like keys to a row of padlocks. That shape change happens by way of two cuts to the spike protein. One cut happens very early in the virus’s assembly, at a spot on the spike protein called the furin cleavage site, where an enzyme called furin neatly snips the spike. Christian Stevens, an MD/PhD student at the Icahn School of Medicine at Mount Sinai, has compared this cleavage to pushing a button on an umbrella — only after you push the button is the umbrella functional. Furin cleavage cuts the spike between its two subunits, Subunit 1 and Subunit 2. This cleavage changes the shape of the spike protein so that it’s ready for a second, crucial cut.

This second slice occurs within Subunit 2. There, an enzyme called TMPRSS2 slices the spike again, exposing a new set of amino acids that embed themselves in the cell wall. These proteins essentially pull the two membranes together, melding them. Once inside, the virus hijacks the cell’s machinery to make more of itself.

Without these two cuts, the virus does have another way to get into the cell — it can also sneak into a cell organelle called an endosome, a sort of envelope that cells use to move molecules around. But the endosomal route is slower and more fraught. Cells have defenses in their endosomes that can sometimes recognize and digest viruses, said Stephen Goldstein, an evolutionary virologist at the University of Utah. In other words, furin cleavage and TMPRSS2 make SARS-CoV-2 a much more formidable virus.

Since the coronavirus first leaped into humans in late 2019, it has accumulated a march of mutations, some of them beneficial. One early one, D614G, helps keep the spike protein in an open position so that it binds better to ACE2 receptors. The alpha variant, which first popped up in September 2020 in the U.K., seemed to be helped along by another mutation, N501Y, which also improved ACE2 binding. This mutation, among others, could explain why alpha was about 50% more transmissible than the original coronavirus strain.

But delta left alpha in the dust. Researchers estimate that delta is another 60% more transmissible than alpha, and that the number of people infected by an average person with delta is between five and nine. That’s compared to two to three for the original virus that kicked off the pandemic.

The furin cleavage site may be ground zero for this change. Delta has a mutation at this site called P681R. This mutation isn’t unique to delta; it was also found in a variant that arose in Uganda but never became a global threat. The same mutation is also carried by the kappa variant, a very close relative of delta that was also first detected in India.

In June, researchers reported in a preprint on bioRxiv that the P681R mutation made furin cleavage more efficient, so that virus particles with this mutation are more infectious to cells in Petri dishes. Thanks to this quicker cleavage, a fake viral shell studded with P681R spike proteins was five to six times more infectious than one without the mutation, according to the study.

In another new preprint posted Aug. 13 on bioRxiv, researchers found a similar result using real SARS-CoV-2 viruses. That study pitted alpha against delta in dishes full of human lung and airway cells. It found that, just as delta has replaced alpha around the globe, delta dominates in the lab, out-replicating and out-competing the earlier variant. The researchers, led by University of Texas Medical Branch at Galveston molecular biologist Pei-Yong Shi, found that alpha was actually better than delta at binding to ACE2 receptors. But delta excelled at furin cleavage, suggesting that the P681R mutation is, indeed, its superpower. When the researchers fitted a delta variant virus with a spike protein without the P681R mutation, its replication plummeted.

“P681R is altering the activation properties of the spike, there’s no doubt in my mind,” said Whittaker, who was not involved in the research.

P681R cannot be acting alone, though. The Uganda variant that had this mutation fizzled out, and the kappa variant has now basically disappeared, swallowed in a wave of delta.

“It’s all about how different mutations work together,” Goldstein said. If one mutation improved furin cleavage while a second mutation made the spike protein more stable and less prone to change into the shape needed to enter the cell, for example, the mutations might effectively cancel each other out.

A third preprint, posted Aug. 17 on bioRxiv, highlighted another mutation with a potentially intriguing role. D950N sits in a region of the spike protein that undergoes a big shape change to facilitate fusion with a cell. The mutation is subtle, creating nothing more than a slight shift in the electrostatic potential at the spike protein’s surface. But this tiny change could be enough to destabilize the spike protein, making it more prone to snap into its new shape. That eagerness to change shape could mean fusion goes faster and fails less often.

In that study, the researchers did not find an effect of P681R, which was puzzling given other research on that mutation’s importance, Goldstein said. It might be that the types of cells the researchers used to test infectivity might have skewed that result, Goldstein told Live Science. The study authors in this final research also used virus shells in one experiment and cells festooned with viral proteins in another, rather than real viruses, a common strategy for studying dangerous viruses but one that might not be as realistic as using actual SARS-CoV-2.

In the paper, though, the study’s authors argue that their results suggest that P681R is not so important to delta, given that kappa had the same mutation without the transmissibility boon. The study is now undergoing peer review.

Another finding of the study that did intrigue outside researchers, however, was that delta was apparently better than other variants at entering cells with low levels of ACE2 receptors. There’s a balance for viruses between binding and fusion, Whittaker said. If a virus can bind tightly to a receptor, it can be slow and casual about fusion, since it’s not likely to lose its grip and float away. If it’s very efficient at fusion, binding is less crucial, because it can just “tickle the cell” and get inside, Whittaker said.

Delta seems to be so good at fusion that it can enter cells even when there aren’t many ACE2 receptors to work with. It’s too early yet to say what the implications of this are. One possibility is that delta may more readily infect tissues that are low in ACE2. (ACE2 receptors are found in a lot of body tissues at different levels, especially in the respiratory tissue, circulatory tissue, and the intestines, according to a 2004 study in the Journal of Pathology. They’re not seen in immune tissues or the spleen.) Another is that children might be less protected from delta infection. Kids under 10 may have fewer ACE2 receptors in their respiratory tracts than older people, researchers reported May 20, 2020, in the journal JAMA, something that has led to the hypothesis that kids may not become infected as readily or as severely because SARS-CoV-2 has a harder time entering their cells.

It’s possible that the advent of delta could remove this advantage if it exists, Whittaker said. But that is highly speculative. For one, it’s possible that kids handle infection with fewer complications not because of their ACE2 receptors but because of their strong immune responses in their upper airways, according to a preprint posted on medRxiv in June. For another, receptor levels vary a lot person-to-person, and other proteins in the host cells may matter as much as ACE2.

“It gets complicated very fast,” Whittaker said. Viruses can often find alternative pathways even when one door is blocked.

“Coronaviruses are like the most sneaky viruses there are,” he said. “They’re very adaptable. They can find routes into cells and into people much more so than any other virus. Their spike proteins are very adaptive. It can use multiple triggers to infect and it can adjust itself very easily.”

Despite delta’s efficient furin cleavage, it still has room for improvement, Whittaker said. The HKU1 coronavirus, which causes a common cold-type illness, has an even more efficient furin cleavage site than delta. Delta is remarkably efficient as-is, so it’s not clear if better cleavage would give the virus even more of a transmissibility boost or not. But SARS-CoV-2 may still have one or two mutations up its sleeve to the out-transmit delta.

“I’m waiting to see what happens next with the furin cleavage site,” Whittaker said.