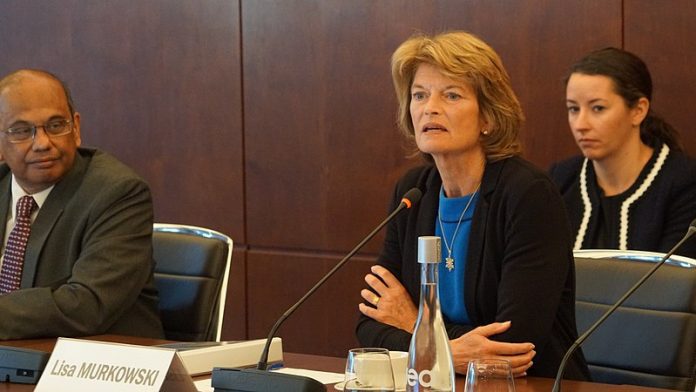 A man upset over the impeachment of former President Donald Trump, illegal immigration, and the direction he thinks the country is headed is accused of threatening the lives of Alaska’s two Republican U.S. senators in a series of profanity-laced voicemails that included saying he would hire an assassin to kill one.

“Your life is worth $5,000, that’s all it’s worth,” the message left at the office of U.S. Sen. Lisa Murkowski said. “And as you let in these terrorists, assassins, guess what? I’m going to use them. I’m going to hire them.”

Some of the voicemails left for Murkowski and U.S. Sen. Dan Sullivan were played in U.S. District Court in Fairbanks on Friday by Assistant U.S. Attorney General Ryan Tansey during the first appearance for Jay Allen Johnson, 65. The Delta Junction man was ordered detained until at least the preliminary hearing set for Oct. 19.

The hearing provided more details of the government’s case against Johnson, who is retired and moved to the rural Alaska community from Texas in 2019 with his wife, Catherine Pousson-Johnson. He had earlier ties to the Fairbanks area.

The caller was also upset that Murkowski voted to convict Trump in his January impeachment trial.

“Nobody in this state wanted you to impeach Trump,” the caller says. “Just resign and get the f— gone.”

In another voicemail, the caller warned the senator’s staff if they didn’t quit, “We are coming for you.”

Murkowski in a statement asked the court not to release Johnson on bail, especially because she was traveling to Alaska for work.

“I’m concerned for my personal safety if he is not detained,” she said in the statement read by Tansey. “And for some reason, he is released. I would like to know what the FBI is doing to ensure my safety and security for the time that I’m here in Alaska.”

The government alleges that Johnson also left 13 voicemails for Sullivan over a five-month period, including one in which he warns Sullivan that he’s tired of politicians destroying the country.

He vowed to get out his .50 caliber firearm out. “I will be having a Go Fund Me page for the shells, and I’m coming with … with a (expletive) vengeance.”

In one voicemail, he claimed he was a veteran. But the Navy, Air Force and Army said they did not have information about Johnson in their ranks. The Marines were still checking.

In some of the voicemails to Sullivan’s office, the government alleges Johnson left his name and address.

In one voicemail, the caller vowed to use “illegals for target practice,” Tansey said.

After Johnson was arrested Monday, authorities found seven guns in the home, which is illegal for Johnson to have because he’s a felon. He has had several drunken driving charges and one related weapon charge while he was intoxicated, a loaded pistol in a shoulder holster, Tansey said.

Johnson’s wife, Catherine Pousson-Johnson, testified on her husband’s behalf in trying to have him released, saying she would drive him the 100 miles (161 kilometers) to Fairbanks for court proceedings.

She detailed a series of recent surgeries he has had, including on his spine, knee and shoulder.

“He’s in pain right now. My husband is an old man, and he gets very angry listening to politics on the news,” she said before being asked by public defender Gary Colbath to restrict her comments.

Tansey later asked her if she was aware her husband was making threats against two U.S. senators.

Against the advice of his lawyer, Johnson also made comments throughout the hearing.

“I’m just prepared to sit in prison the rest of my life, I guess,” he said at one point. “I’m a senior citizen and I am highly disabled and I will not be carrying out any of these threats.”

“I just apologize to everybody,” he later said.

Johnson has split his time between Alaska and Texas. In 2019, he appears to have moved from Tuscola, Texas, to Delta Junction.

Few people in Delta Junction, with a population of about 1,000 in town with another 4,000 or so in the surrounding area, know him, Mayor Lou Heinbockel said.

“I’ve lived here 50 years, and I’ve never heard of the name until I read it in the paper yesterday,” he said.

Cody White sells guns at his Granite View Sports and Gifts store in Delta Junction and doesn’t recall Johnson — a 65-year-old white male standing 5-foot-10 and weighing 180 pounds with black hair and green eyes, according to Texas court documents — ever shopping there. But he says some of his customers said they knew him. They described Johnson as “just a normal guy, quiet,” White said.

“We see a ton of people in town and usually if they’re here more than a year, I usually know who they are. But I don’t know if this guy has ever been in the store,” he said.

On June 18, 2019, Johnson registered to vote as a member of the Alaska Constitution Party, Tiffany Montemayor, a spokesperson for the Alaska Division of Elections, said in an email to The Associated Press.

It is not recognized as a party in the state, but it is a political group with about 680 members, she said.

“He does not register with me, I don’t recall him at all,” said J.R. Myers, the founder and chairman of the Alaska Constitution Party. “As far as I know, he’s never been active in the party, so I’m not sure who he is.”