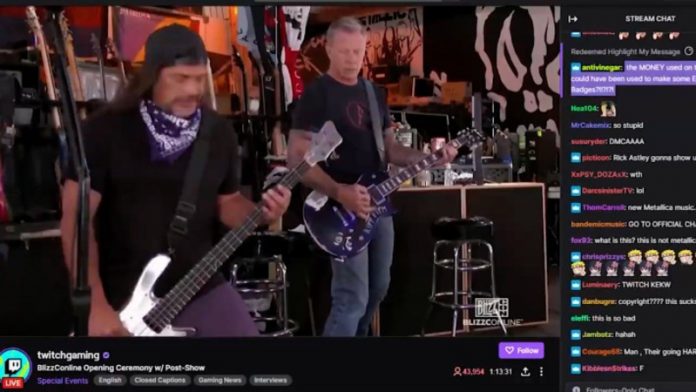 The gaming platform Twitch, which has had no shortage of music-copyright problems in recent months, cut off the audio for Metallica’s BlizzCon performance Friday due to legal concerns, replacing it with comically inappropriate instrumental folk music. That the switch came in the middle of “Enter Sandman,” one of the group’s biggest hits, only made the disconnect more enraging and/or hilarious. 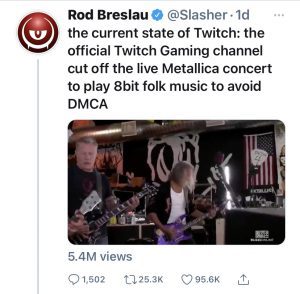 According to reports in Metal Injection and other outlets, the news was first reported by e-sports analyst Rod “Slasher” Breslau, who also was reluctant to post the full clip, although others did in short order. The band’s full performance of the song, minus the folk music, was still available on YouTube at the time of this article’s publication.

Many have also pointed out that contemporary copyright laws were shaped in no small way by Metallica’s battle with Napster in the early 2000s, which played a role in bringing down the service that ushered in illegal downloading and, ultimately, the streaming era. Metallica have long been fiercely protective of their copyrights — at times, belligerently so — and their unexpected endorsement of Spotify in 2012 helped clear the way for the mainstream acceptance of streaming services.

Reps for Twitch and Metallica either declined or did not immediately respond to Variety’s requests for comment.

Twitch, which is owned by Amazon, has been lambasted by music-industry organizations in recent months for turning a blind eye to the use of unlicensed songs on its service — and frustrating and confusing Twitch creators for deleting their videos for copyright violations. In November, it published a lengthy blog post that told streamers they must stop playing recorded music on their streams (unless it’s officially licensed) and that “if you haven’t already, you should review your historical VODs and Clips that may have music in them and delete any archives that might.”