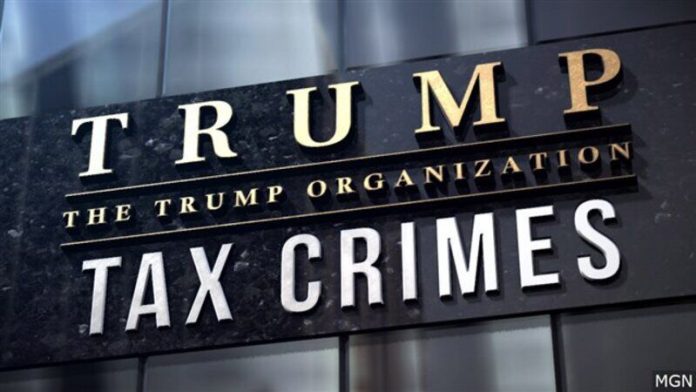 President Donald Trump has been banned from social media, forcing him to send out statements via press releases. Such was the case after a filing from New York Attorney General Letitia James.

James’ office filed an extensive statement of facts in the case involving fraud around the Trump Organization. Numerous allegations are cited with supplemental documents from the AG. In one case, Trump was quoted falsely inflating the size of his penthouse by three times. Another case revealed Trump tried to get appraisers to grossly exaggerate the value of his massive Georgian Mansion, Seven Springs. Ivanka Trump was on the hook as well, as she was the primary person dealing with Deutsche Bank. According to the documents, Ms. Trump “caused misleading financial statements to be submitted.” Eric Trump was questioned for six hours, answering over 500 questions by using his Fifth Amendment rights.

Though the Trump Org. spokesperson, the ex-president, and his family went after James personally. The company didn’t respond to any of the specific allegations, only to say that the “facts” were “misrepresented.” According to the Trump Org., he is innocent of all of the examples of fraud cited in the court documents because James pledged to investigate Trump during her campaign.

“The only one misleading the public is Letitia James. She defrauded New Yorkers by basing her entire candidacy on a promise to get Trump at all costs without having seen a shred of evidence and in violation of every conceivable ethical rule,” the statement from the Trump Organization read. “Three years later she is now faced with the stark reality that she has no case. So, in response to Trump suing her and filing multiple ethical complaints, and on the heels of her failed governor’s race, she has no choice but to mislead the public yet again by misrepresenting the facts and ignoring her own inflammatory comments. Her allegations are baseless and will be vigorously defended.”

It was oddly similar to the statement from Donald Trump Jr., who also personally attacked James as “America’s most corrupt AG,” without providing any evidence.

He claimed that James “won’t even directly respond to our motions about her political targeting of my family because she knows her actions are indefensible. This is nothing more than political retribution from her on behalf of the entire Dem Party. She should be disbarred!”

It’s the same kind of tactic Trump and his children have used against almost everyone who has opposed him, especially judges and the courts.

When students from the now-defunct Trump University sued for fraud, then-candidate Trump called Judge Gonzalo Curiel “a hater of Donald Trump” and a “very hostile” person who had “railroaded” him.

“I’ll be seeing you in November, either as president…” Trump continued, trailing off. “I think Judge Curiel should be ashamed of himself. I think it’s a disgrace that he’s doing this. The judge, who happens to be, we believe, Mexican…I think the Mexicans are going to end up loving Donald Trump.”

In another incident, `Trump mocked Dr. Christine Blasey Ford for not remembering details about the night of her alleged assault 36 years ago.

“I had one beer!” the president said, about Ford’s statement she wasn’t as inebriated as Kavanaugh during the alleged sexual assault.

Trump and ally Roger Stone used a tactic of attacking the judge handling Stone’s case. They were so brutal with their insults that they then tried to say that the judge couldn’t render an unbiased verdict. It didn’t work and a gag order was set, which Stone violated.