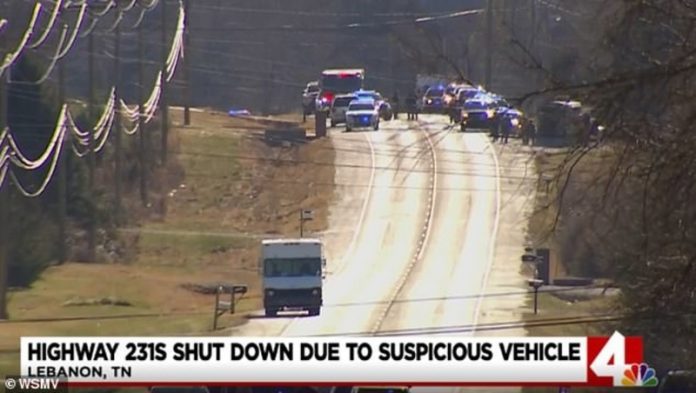 A Tennessee highway was closed on Sunday, December 27, 2020, amid reports of a truck with a PA system telling people to evacuate the area.

The Wilson County Sheriff’s Office tweeted: ‘Highway 231 South from the Cedars of Lebanon State Park to Richmond Shop road is currently shut down due to a suspicious vehicle.

‘Please avoid the area and seek an alternate route. We will post updates as more information comes in.’

It comes just two days after the Nashville bombing in which a recreational vehicle blew up on a mostly deserted street and was prefaced by a recorded warning advising those nearby to evacuate.

Pictures show a white truck on an empty road surrounded by police cars.

The truck had told people to evacuate via a PA system, WSMV reports. 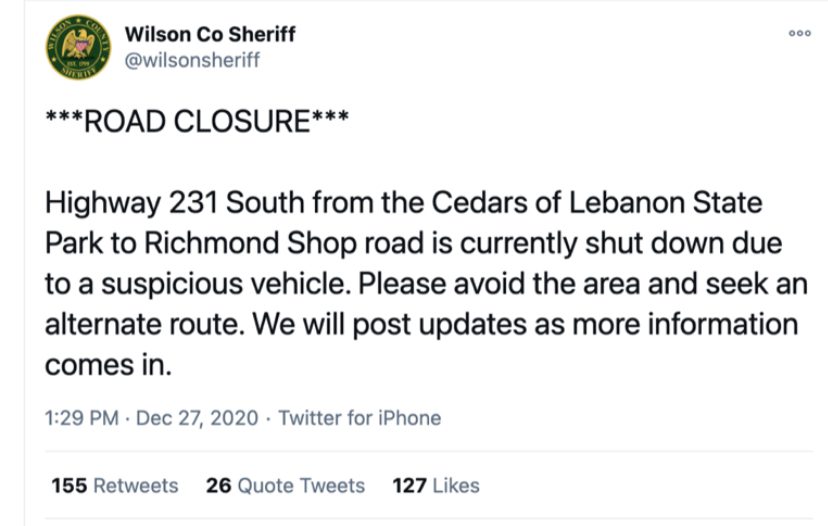 A statement released by Rutherford County Sheriff’s Office in regards to the suspicious vehicle that was pulled over on Highway 231 South. The scene is still active

“Deputies detain box truck driver playing audio at store.  Sheriff’s deputies in Rutherford and Wilson Counties are investigating a box truck parked at a convenience store playing audio similar to what was heard before the Christmas Day explosion in Nashville.

The driver traveled from Rutherford County into Wilson County where he was stopped by deputies and detained.

As a precaution, nearby residents were evacuated during the active investigation.

Rutherford County dispatchers received a call about 10:30 a.m. about the white box truck parked at Crossroads Market in Walter Hill. Deputies located the truck and made the traffic stop.

Rutherford and Wilson County Sheriff’s Office and the Tennessee Highway Patrol are working together in the ongoing investigation.”