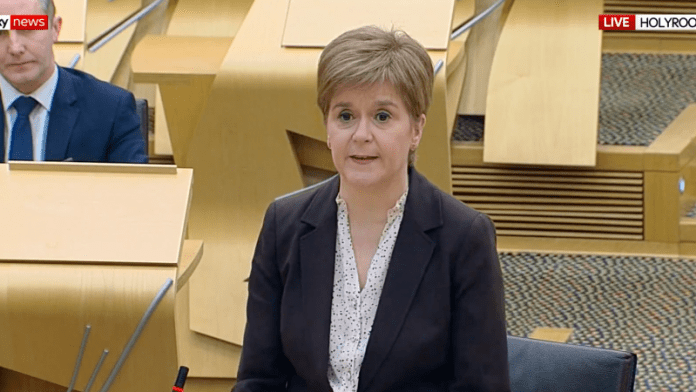 Then the Sunday Post in Scotland reported that Glasgow Prestwick Airport “has been told to expect the arrival of a US military Boeing 757 aircraft, that is occasionally used by Trump, on January 19.”

Could the American president, on his last full day in office, wing his way to his ancestral Scotland to hit the links at his shuttered resort, possibly missing the inauguration?

On Tuesday, January 5, 2021, the leader of Scotland, First Minister Nicola Sturgeon, was asked if Trump was headed her way, and what might be her message to him?

At her daily news briefing, Sturgeon said, “I have no idea what Donald Trump’s travel plans are, you’ll be glad to know.”

Then she added, “I hope and expect that his immediate travel plan is to exit the White House, but beyond that, I don’t know.”

Finally, Sturgeon warned Trump he might be breaking the law if he came: “We are not allowing people to come into Scotland now without an essential purpose, which would apply to him, just as it applies to everybody else. Coming to play golf is not what I would consider an essential purpose.”

Scotland, alongside Northern Ireland, Wales and England are in lockdown, with stay-at-home orders, allowing people to venture out only for essential work or shopping, and to get a bit of exercise and attend medical appointments. Hospitals here are filling rapidly as infections surge, driven by a new variant of the virus, which is 50 to 70 percent more transmissible.

As for Trump’s plans for the day of the Biden inauguration Jan. 20 — or his travel plans the day before — the White House batted away the speculation.

“Anonymous sources who claim to know what the President is or is not considering have no idea. When President Trump has an announcement about his plans for Jan. 20 he will let you know,” White House spokesman Judd Deere said in a written statement.

The White House followed up with a second statement, attributed to press secretary Kayleigh McEnany, that the reports of a Trump trip to Turnberry were “not accurate. President Trump has no plans to travel to Scotland.”

Where Trump and his family members will go and where they will live after his term has not been announced.

The Trump Organization owns two golf resorts in Scotland, and one closest to the Glasgow Prestwick Airport is Trump Turnberry, a 112-year-old Scottish resort that he bought in 2014.

Turnberry, which includes a large Edwardian-era hotel as well as a historic seaside golf course, is one of the largest revenue generators among Trump’s small empire of hotels and clubs.

Trump has spent more than $218 million on the property so far — $67 million to buy it in 2014, then lending the property another $150 million to keep it operating since. But the club has never turned a profit, according to public filings: Even in the boom times of 2019, it lost about $3 million for the year.

The resort has not yet released data for 2020, but it appears to have been devastated by the pandemic, which caused the club to be shuttered for weeks in the spring — and then again this winter, as Scotland entered another strict lockdown.

If Trump does plan to visit Turnberry in January, he will probably find it empty: The resort’s website now says, “To ensure the health and safety of our guests and associates, we have made the difficult decision to remain closed until Friday 5th February 2021.”