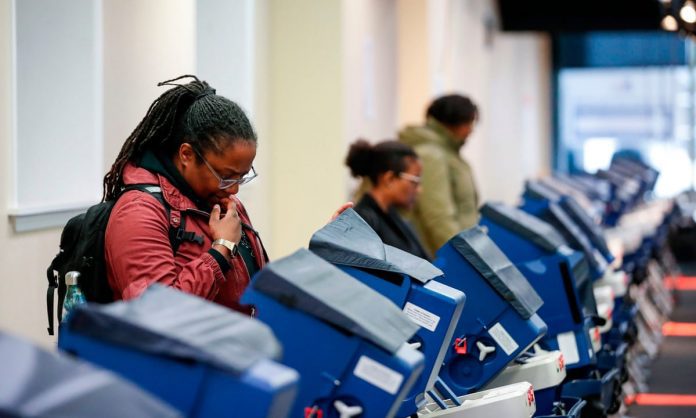 3.5 million Black Americans were profiled and categorized as ‘Deterrence’ by the Trump campaign – voters they wanted to stay home on election day.

It reveals that 3.5 million Black Americans were categorized by Donald Trump’s campaign as ‘Deterrence’ – voters they wanted to stay home on election day.

Tonight, civil rights campaigners said the evidence amounted to a new form of voter “suppression” and called on Facebook to disclose ads and targeting information that has never been made public.

The ‘Deterrence’ project can be revealed after Channel 4 News obtained the database used by Trump’s digital campaign team – credited with helping deliver his shock victory to become president four years ago.

Vast in scale, it contains details on almost 200 million Americans, among more than 5,000 files, which together amass almost 5 terabytes of data – making it one of the biggest leaks in history.

It reveals not only the huge amounts of data held on every individual voter, but how that data was used and manipulated by models and algorithms.

In 16 key battleground states, millions of Americans were separated by an algorithm into one of eight categories, also described as ‘audiences’, so they could then be targeted with tailored ads on Facebook and other platforms.

One of the categories was named ‘Deterrence’, which was later described publicly by Trump’s chief data scientist as containing people that the campaign “hope don’t show up to vote”.

The disproportionate categorising of Black Americans for ‘Deterrence’ is seen across the US. Overall, people of colour labelled as Black, Hispanic, Asian and ‘Other’ groups made up 54% of the ‘Deterrence’ category. In contrast, other categories of voters the campaign wished to attract were overwhelmingly white.

The 2016 campaign preceded the first fall in Black turnout in 20 years and allowed Donald Trump to take shock victories in key states like Wisconsin and Michigan by wafer-thin margins, reaching the White House despite losing the popular vote to Hillary Clinton.

Cambridge Analytica collapsed after investigations by Channel 4 News, The Guardian and the New York Times in 2018.

Facebook is facing calls to ban political advertising, following an international backlash over the use of its platform to spread misinformation, disinformation, and suppression during election campaigns.

The Trump campaign spent £44 million on Facebook ads alone during 2016, posting almost six million different versions of highly targeted messages that were pumped directly into the feeds of target voters across America, helped by a Facebook employee embedded within the Trump campaign.

But many of the ads were so called ‘dark posts’, which could vanish from recipients’ feeds once a campaign stopped paying for them.

It means no complete public record exists of the ads posted on Facebook during the 2016 campaign or the audience lists used to target voters. The platform offered no ‘Ad Library’ at the time.

Without Facebook or the campaign itself revealing the information, it means it’s not possible to ascertain exactly how potential voters in the ‘Deterrence’ group may have been targeted on Facebook.

The Trump campaign itself has categorically stated that it did not target African Americans.

Brad Parscale, the campaign’s 2016 digital director told PBS Frontline: “I would say I’m nearly 100 percent sure we did not run any campaigns that targeted even African Americans.”

But Channel 4 News has uncovered evidence that the campaign did target Black voters with negative ads designed to crush Hillary Clinton’s turnout.

These included videos featuring Hillary Clinton referring to Black youths as “super predators” which aired on television 402 times in October 2016 and received millions of views on Facebook.

In one confidential document seen by Channel 4 News, Cambridge Analytica admitted the Trump campaign did target “AA” (African Americans) with what it called the “Predators video” – spending $55,000 USD in the state of Georgia alone.

Reacting to the Channel 4 News revelations, Jamal Watkins, vice president of the National Association for the Advancement of Colored People (NAACP) branded it a modern-day suppression campaign, using data and digital technology to keep Black voters at home.

He said: “The thing that’s shocking slash troubling about this is that there’s this category of suppression. That ‘Deterrence’ part. So, we use data – similar to voter file data – but it’s to motivate, persuade and encourage folks to participate. We don’t use the data to say who can we deter and keep at home. That just seems, fundamentally, it’s a shift from the notion of democracy.

“It’s not ‘may the best candidate win’ at that point it’s ‘may the best well-funded machine suppress voters and keep them at home thereby rigging the election so that someone can win’.”

He added: “I don’t believe Facebook has fully disclosed their role, and fully disclosed the types of ads that were run, who was involved and literally how they may have been embedded in, say, the Trump campaign to make this all come to life.

“Facebook is a very profitable platform. It reaches billions of folks every day. It doesn’t need this kind of money. If it were to monitor and check these suppressive ads and say this is not the platform for this type of misinformation disinformation suppression tactics, Mark Zuckerberg would still live well, and eat well.”

Today, a Facebook spokesperson said: “Since 2016, elections have changed and so has Facebook – what happened with Cambridge Analytica couldn’t happen today. We have 35,000 people working to ensure the integrity of our platform, created a political ads library… and have protected more than 200 elections worldwide. We also have rules prohibiting voter suppression and are running the largest voter information campaign in American history.”

The Trump campaign, the Republican National Committee and the White House did not provide any comment to Channel 4 News prior to broadcast.