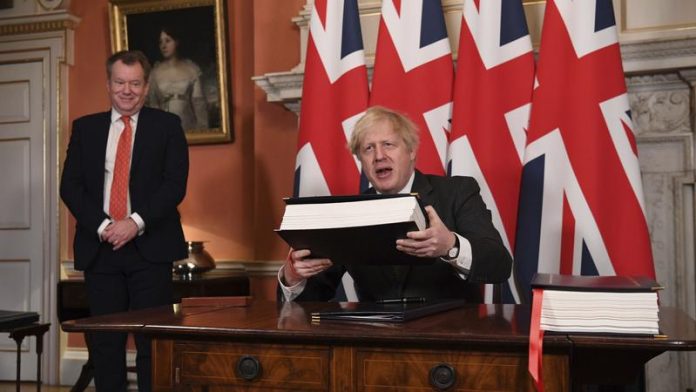 I have led our EU exit process for the two and half years since you became Prime Minister.

In those years we have restored the UK’s freedom and independence as a country and begun the process of building a new relationship with the EU.

That will be a long-term task. That is why we agreed earlier this month that I would move on in January and hand over the baton to others to manage our future relationship with the EU.

It is disappointing that this plan has become public this evening and in the circumstances I think it is right for me to write to step down with immediate effect.

It has been a huge honour and privilege to work with you over the last five years, first in the Foreign Office and then in No.10.

You have been an outstanding leader at a moment of grave constitutional crisis for this country.

Many said that it would be impossible to deliver what we did: an end to political turbulence by implementing the referendum result, a stunning election victory, an exit from the EU which gave us full freedom about our future choices as a country, and finally putting in place the world’s broadest and indeed only zero-tariff free trade deal.

You and I have always shared the same approach on Brexit and I do not think we would have achieved so much without that close common understanding of our aims.

Brexit is now secure. The challenge for the Government now is to deliver on the opportunities it gives us.

You know my concerns about the current direction of travel. I hope we will move as fast as possible to where we need to get to: a lightly regulated, low-tax, entrepreneurial economy, at the cutting edge of modern science and economic change.

Three hundred years of history show that countries which take that route grow and prosper, and I am confident we will too.

We also need to learn to live with Covid and I know that is your instinct too.

You took a brave decision in July, against considerable opposition, to open up the country again.

Sadly it did not prove to be irreversible, as I wished, and believe you did too. I hope we can get back on track soon and not be tempted by the kind of coercive measures we have seen elsewhere.

Together we have put this country onto a new path. I am confident that under your leadership this newly free Britain can succeed and prosper hugely.

I wish you and the Government every success in that.

Thank you for your letter tendering your resignation as Minister of State at the Cabinet Office.

I was very sorry to receive it, given everything you have achieved and contributed to this Government for which I am very grateful. I particularly want to pay tribute to your unique contribution towards getting Brexit done. First, as my EU Sherpa to ensure a smooth withdrawal from the EU on 31 January 2020. Then, as the chief negotiator to secure the Trade and Cooperation Agreement, which fully restored the UK’s sovereignty as we took back control of our laws, borders, money, trade, and fisheries.

Many said that it would be impossible to secure such a comprehensive agreement — the first zero tariff, zero quota deal the EU had ever agreed — in such short time, even before the COVID-19 pandemic struck. It simply would not have been possible without your relentless hard work, resolve and vision. You should be immensely proud of your historic service to this Government and this country.

After joining Cabinet as Minister of State at the Cabinet Office in March, you have helped oversee the implementation of the TCA, guided our relationship with the EU and pushed this Government to maximise the economic and political opportunities of Brexit. Crucially you have helped highlight and sought to address the destabilising impact the current operation of the Northern Ireland Protocol is having on communities in Northern Ireland, which is undermining the Belfast (Good Friday) Agreement and the territorial integrity of this country.

Once again, I am grateful for all you have achieved and hope that you will be able to serve this country again in the future.