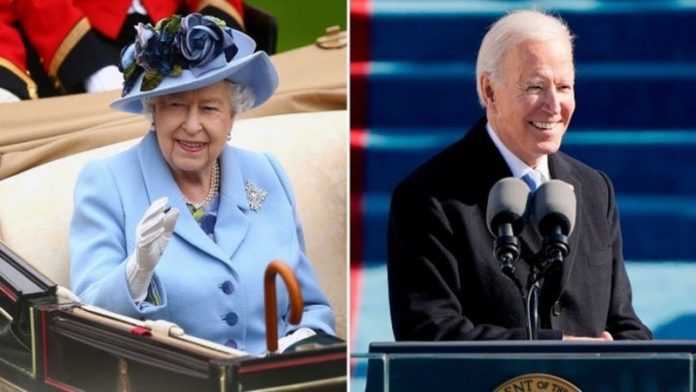 Britain’s Queen Elizabeth II is expected to host the newly minted US President Joe Biden at Buckingham Palace ahead of the G7 summit scheduled between June 11 and 13. According to PTI, the Foreign, Commonwealth, and Development Officer (FCDO) is keen for the royal family to have a strong presence as part of a pre-summit and post-Brexit charm offensive of world leaders. A senior royal official further confirmed the report and said that there is a desire from the FCDO to have a strong presence before G7 events and all senior members of the Royal family will be part of what happens.

The Queen, who has been based at her Windsor Castle home in south-east England since last year, will be hoping to return to her London palace and get a calendar of activities at Buckingham Palace after a year of pared-down events. A one-on-one meet between the Queen and Biden is set to be her first significant diplomatic engagement after she returns to London. Further, a so-called soft power reception in June is also expected, which will include her son and heir Prince Charles and his wife Camilla, as well as grandson Prince William and wife Kate Middleton, under plans being drawn by royal and government officials to cement the special relationship between the UK and the US.

As per reports, the Queen has already sent the new US President a private message ahead of his inauguration on January 20. Prince Charles has also sent a handwritten note to Biden in a bid to congratulate him on his appointment. The heir to the throne is also said to be delighted with a series of executive orders by the new President which address climate change and the environment.

Meanwhile, an official statement of the British high commission said that the UK will use the G7 Presidency to unite leading democracies to “help the world build back better from coronavirus” and create a greener, more prosperous future. UK’s motive is to use the G7 to intensify cooperation between the world’s democratic and technologically advanced nations. Between them – Group of Seven the UK, Canada, France, Germany, Italy, Japan, and the US – the 10 leaders represent over 60% of the people living in democracies around the world.

Last week, PM Narendra Modi was also invited by the UK to attend the G7 Summit as a guest this year. Other than India, Australia and South Korea are also invited as guest countries to attend the Summit to “deepen the expertise and experience around the table”. The summit will be held in Cornwall, Southwest England and it will be hosted by UK Prime Minister Boris Johnson where he will address shared challenges like the Coronavirus and climate change.