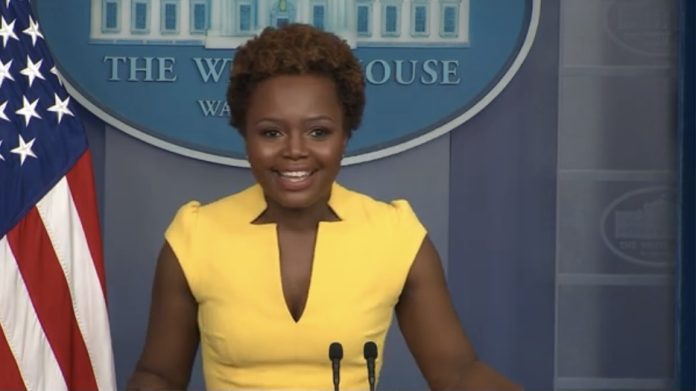 Statement from President Biden: “I am proud to announce that Karine Jean-Pierre will serve as the next White House Press Secretary.

“Karine not only brings the experience, talent, and integrity needed for this difficult job, but she will continue to lead the way in communicating about the work of the Biden-Harris Administration on behalf of the American people. Jill and I have known and respected Karine for a long time and she will be a strong voice speaking for me and this Administration.

“Jen Psaki has set the standard for returning decency, respect, and decorum to the White House Briefing Room. I want to say thank you to Jen for raising the bar, communicating directly and truthfully to the American people, and keeping her sense of humor while doing so. I thank Jen for her service to the country, and wish her the very best as she moves forward.”

Karine Jean-Pierre, Press Secretary and Assistant to the President

Prior to her role on the campaign, she served as Chief Public Affairs Officer for MoveOn.org and an NBC and MSNBC Political Analyst. Jean-Pierre served as Regional Political Director for the White House Office of Political Affairs during the Obama-Biden administration and as Deputy Battleground States Director for President Obama’s 2012 re-election campaign. She served as Southeast Regional Political Director for President Obama’s 2008 campaign, Deputy Campaign Manager for Martin O’Malley for President, Campaign Manager for the ACLU’s Reproductive Freedom Initiative, and Deputy Chief of Staff and Director of Legislative and Budget Affairs for two members in the New York City Council.

Previously, she worked at the Center for Community and Corporate Ethics, pushing major companies to change their business practices, and is a published author. Born in Martinique and raised in New York, Jean-Pierre is a graduate of Columbia University.

Anita Dunn, Senior Advisor and Assistant to the President

Anita Dunn is one of the nation’s top communications and political strategists and is a close advisor to President Biden. She recently served as a Senior Advisor to President Biden and is currently a partner and founding member of SKDK. She brings decades of experience advising Presidents and senior Democrats. She served as a chief strategist to President Obama as a senior campaign advisor and as the White House Communications Director. She has also worked in leading roles for Tom Daschle, Bill Bradley, and Evan Bayh.

As Senior Advisor to President Biden, Anita advised on the administration’s overall strategy and messaging, helping the President take steps and win legislative victories that helped jumpstart the economy after the pandemic. Prior to that, she served as a senior advisor on the Biden-Harris campaign, advising on all aspects of the campaign. At SKDK, Anita has worked with progressive and issue advocacy campaigns, giving strategic advice to elected officials, political candidates, CEOs, nonprofits, and corporations.