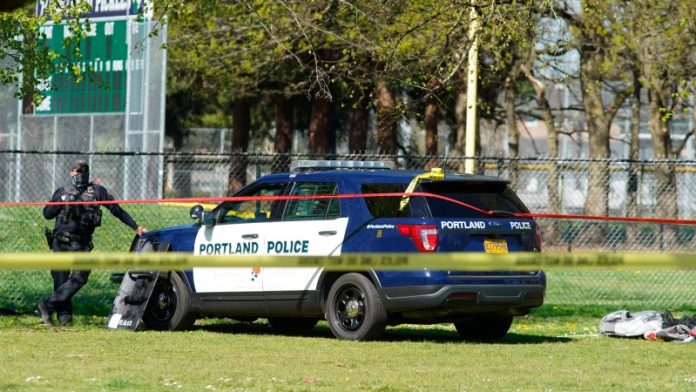 Portland police responding to a call of a man with a gun Friday morning, April 17, 2021, in Lents Park fatally shot the man after he drew what appeared to be a firearm, according to two sources with direct knowledge of the investigation.

The man died at the scene.

Investigators recovered what appeared to be a replica firearm with an orange tip on it, the sources said. A witness videotaped the shooting and provided the footage to the police.

Police had received multiple calls about the man in the park with a gun shortly after 9:30 a.m.

Two officers who confronted the man fired less-lethal, 40-millimeter munitions at him, and an East Precinct officer shot him with a firearm, Acting Chief Chris Davis said.

Emergency medics tried to revive the man, but he was pronounced dead beside a fence by the park’s ball field off Southeast 92nd Avenue.

Police said the officer who fired the fatal shot is an 8-year veteran of the department. The bureau did not release the officer’s name.

Dozens of demonstrators gathered at the scene shortly after the shooting, screaming at officers from the park’s perimeter.

Todd Littlefield, who lives nearby, said he went to the park after he heard gunfire.

“I was just getting in my truck, and I heard a loud shot,” he said.

Littlefield said he drove to the park and saw several officers standing behind trees and their cars, ordering a man to show his hands.

Juan Chavez, an attendant at the nearby AM/PM convenience store, said he saw a man standing in the middle of the intersection of 92nd Avenue and Holgate Boulevard prior to the shooting.

The shirtless man had his arms up, was blocking traffic, and appeared to be disoriented and banging on cars, according to Chavez.

The victim’s body was covered in a white sheet by the edge of the ball field’s fence, located between a marked police SUV and a tree. Next to the police SUV was a mangled tent that the man had thrown toward officers, according to a witness’ video obtained by police.

After police forensic criminalists photographed the scene and the body, deputies from the state medical examiner’s office removed the victim on a stretcher about 2 p.m.

Mayor Ted Wheeler, who serves as police commissioner, responded to the park and was briefed on the incident, which marked the first fatal shooting by Portland police since officers shot and killed Koben Henriksen in December 2019. Portland police twice fired weapons in 2020. No one was injured in those incidents.

“These shootings always are traumatic for everyone involved and for our community, regardless of the circumstances,” he said in a statement. “I recognize why people are concerned and possibly angry. While our understanding of this incident evolves, I urge everyone to proceed with empathy and peace.”

The Oregonian/OregonLive typically does not identify a person’s race unless it is relevant. However, the incident came in the wake of several high-profile fatal police shootings of Black men elsewhere in the country.

Several sources confirmed to the newspaper that the victim, in this case, was a white man in his 30s. Investigators had yet to identify him Friday night, according to sources.

Lents Park, where Friday’s shooting occurred, is within an area served by Portland Street Response — a pilot program that aims to provide a non-police response to individuals experiencing a mental health crisis or homelessness.

Davis said the response team would not have been called in for Friday’s shooting because the initial call involved a weapon.

“We express our deepest sympathies to the family of the individual who was killed,” said Jake Cornett, executive director of the advocacy group Disability Rights Oregon, in a statement. “We don’t know yet all of the facts of the situation, but the person appears to have been experiencing a mental health crisis.”

With Portland police under a 2014 federal settlement agreement for their excessive use of force against people suffering from mental illness, “Portland needs to do better,” Cornett added.

Within 90 minutes of the shooting, a group of demonstrators began to gather at the park, including Letha Winston, the mother of Patrick Kimmons, a Black man who was shot and killed by Portland police in 2018.

“We’re sick and tired of you killing people!” she shouted through a megaphone.

About 100 people were on hand by late morning, chanting “Justice Now!” to the beats of two drummers. The crowd lined up against a flank of about a dozen officers who had donned riot gear, and police told protesters to leave the area or risk arrest.

The crowd began to march around the park about 2:15 p.m. while a line of officers maintained a perimeter around the investigation scene. Over two-dozen additional officers in riot gear arrived about 3 p.m.

Police said in a statement that protesters threw sticks and full water bottles at officers, tried to pull away from an officer’s baton, and flattened the tires of at least one police car. Officers deployed pepper spray in response, according to police.

Police said they dropped smoke bombs and used a rubber ball grenade to distract protesters so officers could leave the area.

Protesters later started a fire in a large recycling bin, blocked traffic, and engaged in altercations with motorists. They had largely cleared the area by 4:30 p.m.

Davis said the bureau summoned “just about every police officer in the county” to keep protesters away from investigators and the crime scene.

Portland Police Chief Chuck Lovell was out of state on vacation Friday. He left Thursday and is not expected to return until April 26, a police spokesman said. 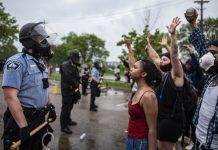 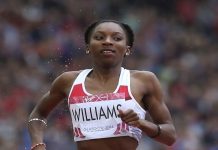 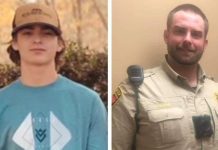 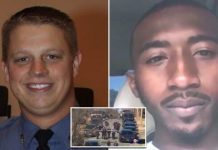