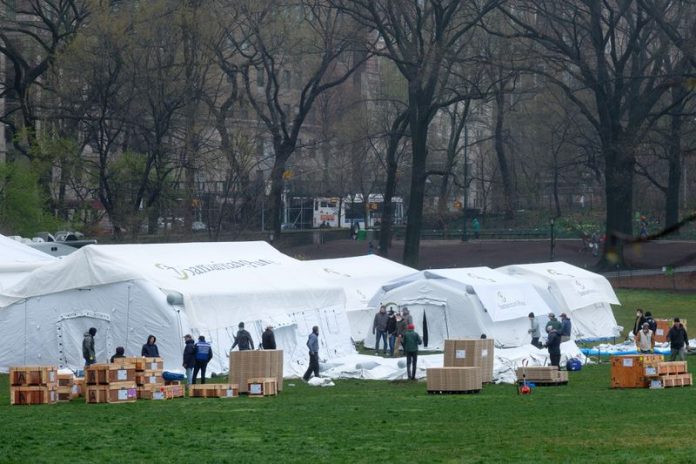 A high wind warning is in effect for most of the region through 6 p.m. on April 13, 2020, in New York. Wind gusts could reach 70 mph. Those strong winds could rip down trees and power lines, potentially causing widespread outages.

They could also damage even sturdy and well-secured tent structures, the National Weather Service says, raising concerns about the already vulnerable COVID-19 patients being treated in field hospitals across the metro area. Tri-state leaders say their makeshift hospitals are protected, including the one at Central Park, where nearly 50 virus patients were being treated as of late Sunday. Five of the Central Park patients are in ICU care, city officials said.

Rain is expected to be the primary impact through the morning and into the early afternoon. Up to 2 inches of water could fall before it ebbs, with locally higher amounts possible. A coastal flood advisory is in effect for parts of the city, Long Island and Fairfield County in Connecticut. New York City’s Flash Flood Emergency Plan has been activated, though the winds are more of a threat.

The National Weather Service and New York City’s Office of Emergency Management strongly advise people to heed the stay-at-home guidance already in place because of coronavirus. If you have to go outside, avoid being in areas around trees and branches. If you have a multi-level home, remain in the lower levels during the peak winds, the National Weather Service says.

In New York City, where there are more than 189,415 COVID-19 cases reported and 9,385 deaths, a 68-bed field hospital using tents has been operational in the city’s Central Park. Other medical facilities in the region also have used tents outside to either screen or treat patients as part of the COVID-19 response.

Forecasters warned Monday that even those structures may be impacted by the high winds.

“Even sturdy and well-secured tent structures could be damaged,” the NWS said.