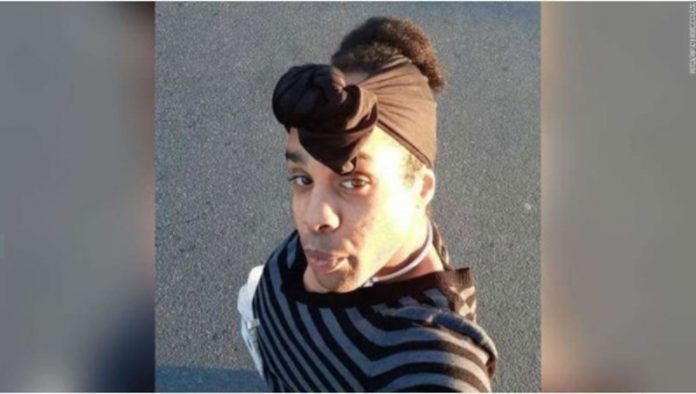 A Virginia man has been released from the hospital following weeks of recovery after a Spotsylvania County deputy shot him multiple times while responding to a 911 call in April.

Isaiah Brown, 32, of Spotsylvania, was discharged from a local hospital Tuesday and will continue his rehabilitation at home after he was shot eight times by a Spotsylvania County deputy on April 21, 2021. 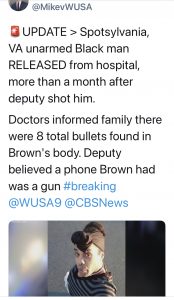 “Doctors have informed the family that there were eight total bullets found in Mr. Brown’s body along with two exit wounds,” according to a statement provided by Brown’s attorney, David Haynes, to WUSA9. “Two of the bullets were previously successfully removed.”

Haynes said no additional materials have been released by the Spotsylvania County Sheriff’s office or the special prosecutor in response to the detailed FOIA requests lodged by counsel for Isaiah.

Follow-up requests in response to those denial letters are being submitted by counsel for Mr. Brown at this time, Haynes said.

According to the Spotsylvania Sheriff’s Office, the incident began early April 21 in the 12200 block of Catharpin Road at approximately 3:18 a.m. when authorities were called to a residence for reports of a “domestic disturbance.”

Sgt. Brent Coffey, a spokesman with Virginia State Police who is assisting in the investigation of the shooting, wrote in an email to WUSA9 that a deputy arrived on the scene and encountered Brown as he was walking in the roadway away from his residence.

Coffey told WUSA9 that Brown was not armed at the time of the shooting. The responding deputy can be heard on body cam video that depicts the events leading up to the shooting shouting “drop the gun” and radioing in to dispatch that Brown had “a gun to his (own) head.”

The video released by Spotsylvania County Sheriff’s Office contains three parts: A video statement by Sheriff Roger Harris, a transcribed 911 call that details the original call, the shooting and the aftermath, and the body camera footage of the shooting, which begins as the deputy is exiting his police vehicle on the scene.

In the 911 audio, a man can be heard in the background asking if Brown had called the police again. During the call, Brown tells the operator that he needed to grab his keys so he can get into his car, which was located in the backyard.

Throughout the duration of the call, Brown is heard allegedly threatening to kill his brother. The operator is continuing to keep Brown on the line. “Why would you say something like that?” the operator asks Brown while keeping him on the line. “OK, but do you understand that you just threatened to kill your brother on a recorded line on 911?”

The recorded call continued as Brown begins to walk outside. As the sirens from the police are approaching, the 911 operator told Brown to put his hands up — at this point, the 911 call begins to overlap with the bodycam video. In the video, the deputy got out of his car and begins to yell at Brown.

The deputy then radios into authorities that Brown allegedly had a gun to his head. After another few times ordering Brown to “drop the gun,” the deputy yelled at Brown to not walk toward him three times before he fired seven shots.

“The investigation remains ongoing at this time, so we are not in a position to comment on any motive or circumstances related to the shooting,” Coffey wrote in a statement to WUSA9. “Once the investigation is concluded, state police will turn over the investigative findings to the special prosecutor for final review and adjudication.”

Brown was taken to Mary Washington Hospital where he was treated for serious injuries not considered life-threatening, according to Coffey. No one else was injured during the incident.

Once state police complete their investigation, the case will be turned over to a special prosecutor, Fredericksburg Commonwealth’s Attorney LaBravia Jenkins, for review, Coffey said.

The identity of the deputy involved has not yet been released.

Isaiah Brown’s sister, Yolonda, described her brother as someone who was known for his smile and was always there to help.

“Anybody knows that if you call on Isaiah, we will be there,” Yolonda Brown said. “He has a good heart, he’s a good person.” 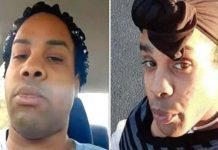 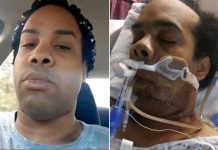