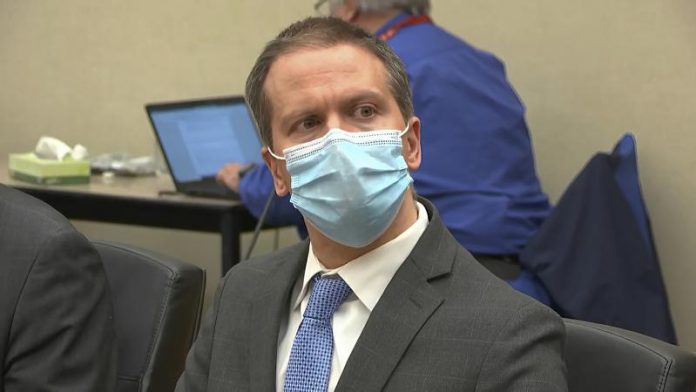 Late last year, as a team of Minnesota state prosecutors, was preparing for the trial that would ultimately convict former Minneapolis police officer Derek Chauvin of murdering George Floyd, they received a series of videos depicting Chauvin’s handling of another case three years earlier that by their own description shocked them.

The videos, from Sept. 4, 2017, allegedly showed Chauvin striking a Black teenager in the head so hard that the boy needed stitches, then allegedly holding the boy down with his knee for nearly 17 minutes, and allegedly ignoring complaints from the boy that he couldn’t breathe.

“Those videos show a far more violent and forceful treatment of this child than Chauvin describes in his report” of the incident, one of the state prosecutors, Matthew Frank, wrote in a court filing at the time.

Now, the U.S. Justice Department may do something that state prosecutors never did: charge Chauvin for the 2017 incident.

Two months ago, federal prosecutors in Minneapolis brought witnesses before a federal grand jury to provide testimony related to the incident, the Minneapolis Star-Tribune reported at the time. And this week, a source informed of the probe told ABC News that the investigation is still underway, with the Justice Department still weighing whether to bring federal charges against Chauvin for both the 2017 incident and George Floyd’s death.

Officials at the Minneapolis Police Department (MPD) were recently briefed on the federal government’s interest in the 2017 incident, a move that came before the Justice Department this week launched a sweeping investigation of MPD’s policing practices, ABC News was told.

“We will assist the DOJ with anything that they need, and the chief has pledged full cooperation with any investigating agency,” MPD spokesman John Elder said, speaking generally of any requests made related to police conduct.

Months before the start of the trial against Chauvin, which culminated in Tuesday’s conviction, state prosecutors wanted to describe the 2017 incident to the jury to show a pattern in Chauvin’s conduct, but the judge presiding over the case refused to let prosecutors bring it up.

Nevertheless, in court documents filed before the judge’s final ruling on the matter, Frank said videos of the incident captured by body-worn cameras “show Chauvin’s use of unreasonable force towards this child and complete disdain for his well-being.”

According to Frank’s account of the incident, Chauvin and another Minneapolis police officer were dispatched to a home where a woman claimed she had been attacked by her 14-year-old son and young daughter.

After officers entered the home and spoke to the woman, they ordered the son to lie on the ground, but he refused. Within seconds, Chauvin hit the teenager with his flashlight, grabbed the teenager’s throat, hit him again with the flashlight, and then “applied a neck restraint, causing the child to lose consciousness and go to the ground,” according to Frank’s account of the videos, detailed in a filing seeking permission to raise the incident during the trial.

“Chauvin and (the other officer) placed (the teenager) in the prone position and handcuffed him behind his back while the teenager’s mother pleaded with them not to kill her son and told her son to stop resisting,” Frank wrote, noting that at one point the teenager’s ear began bleeding. “About a minute after going to the ground, the child began repeatedly telling the officers that he could not breathe, and his mother told Chauvin to take his knee off her son.”

About eight minutes in, Chauvin moved his knee to the teenager’s upper back and left it there for nine more minutes, according to Frank.

Eventually, Chauvin told the teenager he was under arrest for domestic assault and obstruction with force. The two officers then helped the teenager to an ambulance, which took him to a hospital to receive stitches, Frank wrote.

In his court filing, Frank said Chauvin’s handling of the 14-year-old boy mirrored Chauvin’s actions with Floyd, when Chauvin pinned Floyd’s neck under his knee for more than eight minutes after responding to a call at a convenience store where Floyd allegedly used a counterfeit $20 bill.

“As was true with the conduct with George Floyd, Chauvin rapidly escalated his use of force for a relatively minor offense,” Frank wrote. “Just like with Floyd, Chauvin used an unreasonable amount of force without regard for the need for that level of force or the victim’s well-being. Just like with Floyd, when the child was slow to comply with Chauvin and (the other officer’s) instructions, Chauvin grabbed the child by the throat, forced him to the ground in the prone position, and placed his knee on the child’s neck with so much force that the child began to cry out in pain and tell Chauvin he could not breathe.”

But Chauvin’s defense attorney Eric Nelson disputed such comparisons, insisting, “there is no marked similarity between (the 2017 incident) and the George Floyd incident.”

In his own court filing objecting to the prosecution team’s efforts, Nelson insisted that during the 2017 incident Chauvin acted according to MPD policy by using a neck restraint against someone “actively resisting” arrest, which MPD policy at the time allowed officers to do, Nelson wrote.

In addition, Nelson noted, “a mother had been physically assaulted by her children,” and when Chauvin’s use of force was reported to supervisors, it was “cleared.”

“It was reasonable and authorized under the law as well as MPD policy,” Nelson said.

The judge presiding over the case agreed with Nelson that the jury should not hear about the 2017 incident, so prosecutors were blocked from bringing it up during Chauvin’s trial.

Three other officers who were with Chauvin at the scene last year when Floyd died have been charged with aiding and abetting Chauvin’s fatal actions. They are scheduled to stand trial in August.

A Justice Department spokesperson declined to comment when contacted by ABC News.

On Wednesday, April 21, 2021, U.S. Attorney General Merrick Garland announced that the Justice Department was launching a civil investigation — not a criminal probe — to determine if the Minneapolis Police Department “engages in a pattern or practice of unconstitutional or unlawful policing,” including whether Minneapolis police routinely use excessive force and engage in discriminatory conduct.

The wide-ranging civil investigation “is separate from and independent of the federal criminal investigation into the death of George Floyd that the Justice Department has previously announced,” Garland said.