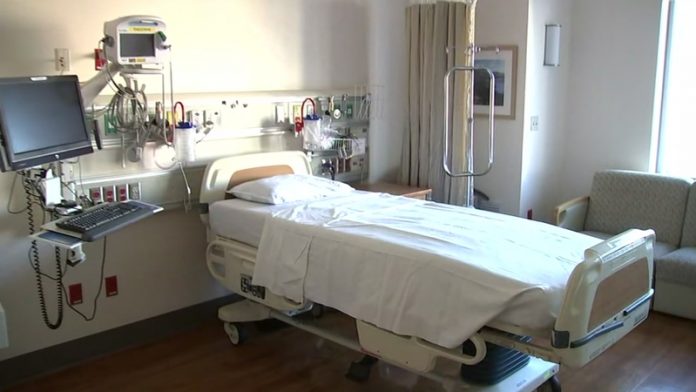 A coronavirus patient in the US suffered a painful three-hour erection due to a rare complication of the disease.

The unidentified 69-year-old, from Ohio, was diagnosed with the condition, known medically as priapism, while in the hospital with a severe bout of Covid last autumn.

He was admitted to the Miami Valley Hospital in August with severe breathlessness and inflammation, which had caused fluid to build up inside his lungs.

The patient, who was obese, was sedated and put on a ventilator when his condition deteriorated and his lungs started to fail after 10 days of treatment.

Medics placed him face down in the prone position for 12 hours as an emergency technique to help get air around his body. When he was turned onto his back later in the afternoon, nurses noticed he had developed an erection.

Writing in The American Journal of American Medicine, medics who treated him said they believed Covid had caused blood clots in his penis.

An ice pack was applied to the patient’s penis to try to bring the swelling down but the stiffness persisted for three hours. Doctors then had to drain the blood from his penis using a needle. While the priapism did not return, the patient died in ICU when his lungs eventually failed.

They said the corpora cavernosa ― the chambers of tissue inside of his penis ― were rigid, yet the tip was flaccid.

The man was diagnosed with low-flow priapism ― when blood becomes trapped in the erection chambers, which is believed to have been caused by clots in his blood.

Because the patient was unconscious, he was unable to answer questions about how much pain he was suffering.

The swelling subsided 30 minutes after his penis had been drained and the patient was put on a drip which included medication to prevent blood clots.

Covid has been found in many patients to damage blood vessels, causing dangerous blood clots.

While experts are unsure why the virus causes the blockages, the prevailing theory is that it is the result of an immune overreaction called a ‘cytokine storm’, which sees the body attack healthy tissue.

Commenting on the case, Dr. Richard Viney, a consultant urological surgeon at the Queen Elizabeth Hospital in Birmingham, said it was ‘interesting’.

He said he hadn’t come across any Covid-19 patients with priapism himself.

Dr. Viney told MailOnline: ‘We haven’t seen any cases of Covid-related priapism like this and we have dealt with more Covid patients than any other European hospital as far as I’m aware, so this is clearly a rare but explainable manifestation of Covid.

‘In this patient, he had low flow priapism which would certainly fit with microemboli (little clots forming in smaller blood vessels) and this is one of the complications of Covid we see in many other organ systems.’

Priapism also affects men with sickle-cell disease, leukemia (cancer of the blood), or malaria, but can happen randomly without any trigger.

Blood clotting has been reported as a dangerous complication in up to a third of coronavirus-infected patients.

When clots block arteries or veins, the blockages can trigger fatal heart attacks and strokes. They can also lead to priapism.

It is not the first time a Covid patient has suffered from priapism.

An unidentified 62-year-old man from France suffered the painful condition while receiving care in hospital for a severe bout of Covid.

The patient left intensive care after spending two weeks on a ventilator, suggesting he has now recovered from Covid-19.

Doctors at Centre Hospitalier de Versailles in Le Chesnay, an area near Paris, wrote about the man in The American Journal of Emergency Medicine.

Myriam Lamamri, an intensive care doctor who treated the French patient, explained blood clotting was the likely cause.

Priapism is a long-lasting painful erection that can cause permanent damage to your penis if not treated quickly, including scarring and permanent erectile dysfunction.

Priapism can occur in all age groups, including newborns. However, it usually affects men in two different age groups: between the ages of 5 and 10, and 20 and 50.

The condition develops when blood in the penis becomes trapped and is unable to drain.

There are two types of priapism: low-flow and high-flow.

Low-flow priapism: This is the result of blood being trapped in the erection chambers. It often occurs without a known cause in men who are otherwise healthy, but it also affects men with sickle-cell disease, leukemia (cancer of the blood), or malaria.

High-flow priapism: This is rarer and is usually not painful. It is the result of a ruptured artery from an injury to the penis or the perineum (the area between the scrotum and anus), which prevents blood in the penis from circulating normally.

Less common causes include blood-thinning medicines, like warfarin, some antidepressants, recreational drugs – like cannabis and cocaine – some medicines for high blood pressure, other blood disorders, like thalassemia and leukemia, and some treatments for erection problems.

Malignant priapism, which is secondary to cancer, is rarely reported and has poor outcomes.

It occurs when cancer causes the penis to become rigid and can only be relieved when the cancer is treated.

An erection that lasts longer than four hours is known as priapism and is a medical emergency.

The goal of all treatment is to make the erection go away and preserve the ability to have erections in the future, and may include surgical ligation, intravenous injection and surgical shunt.