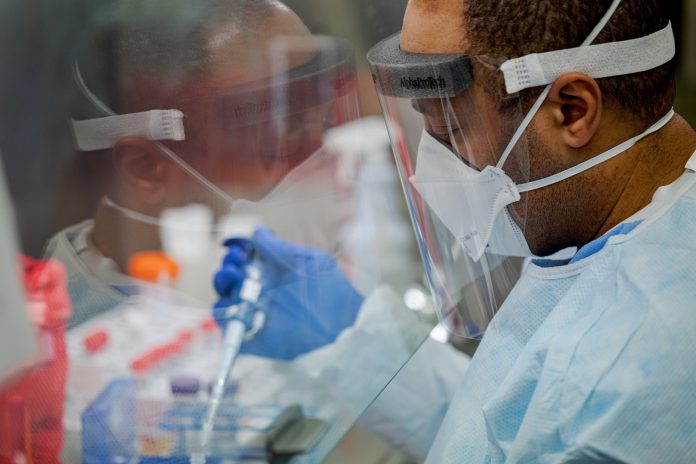 The number of coronavirus tests analyzed each day by commercial labs in the U.S. plummeted by more than 30 percent over the past week, even though new infections are still surging in many states and officials are desperately trying to ramp up testing so the country can reopen.

One reason for the drop-off may be the narrow testing criteria that the Centers for Disease Control and Prevention last revised in March. The agency’s guidelines prioritize hospitalized patients, health care workers and those thought to be especially vulnerable to the disease, such as the elderly. Health providers have been turning away others in part due to shortages of the swabs used to collect samples.

It’s not clear whether demand has peaked among the groups on the CDC’s priority list. But after being overwhelmed for weeks, commercial labs say they are now sitting with unused testing capacity waiting for samples to arrive.

The continued glitches in the U.S. testing system are threatening to impede attempts to reopen the economy and return to normal life. Expanding testing as much as possible is essential so officials have enough data to determine when it’s safe to lift social distancing measures and allow people to go back to work. Continued testing beyond that point will help officials detect — and stamp out — sparks that could set off new outbreaks.

“This is part of an ongoing discussion that we’re having,” he said. “People are working overtime on that one.”

Hahn’s comments came as the American Clinical Laboratory Association reported that the number of samples commercial labs handles each day fell from 108,000 on April 5 to 75,000 by April 12. The group’s members, including commercial giants Quest and LabCorp, analyze about two-thirds of all coronavirus tests in the U.S.

“ACLA members have now eliminated testing backlogs, and have a considerable capacity that is not being used,” ACLA President Julie Khani told POLITICO. “We stand ready to perform more testing and are in close communication with public health partners about ways we can support additional needs.”

The Department of Health of Human Services has also seen a downtick in the number of tests analyzed nationwide in recent days, a spokesperson said.

But the Association of Public Health Laboratories said its members, which have been analyzing a smaller portion of coronavirus tests, have not noticed a similar decrease in demand. The American Hospital Association said it is not aware of member hospitals conducting fewer tests, but added: “it’s not something we have numbers on.”

Public health experts, including former FDA Commissioner Scott Gottlieb, have put forth several plans outlining how the U.S. could reopen, and all agree that the country needs to dramatically increase the number of Americans tested — in part by expanding who is eligible for screening.

Achieving that goal will require a major expansion of lab capacity and the supply of test kits, Gottlieb said last week on Twitter. “Getting next million tests/week will be harder than getting the first,” he wrote.

The CDC has not yet responded to questions about whether it is considering changes to its testing criteria.

Top Trump administration officials have been bullish on the country’s capacity to expand testing.

Vice President Mike Pence told reporters Monday that the government believes that if labs are able to utilize the machines they already have in the house “we could double the amount of testing in the United States literally overnight.”

Quest Diagnostics, one of two major U.S. commercial lab companies, told POLITICO it is increasing outreach to health providers to “ensure patients are receiving testing they need.” The lab company, which had a backlog of 160,000 tests as recently as late March, says it now can run 45,000 tests per day and has unused capacity.

But some labs are still struggling with supply shortages that make it difficult to analyze samples. Many medical school labs and teaching hospitals are having trouble getting enough swabs, personal protective equipment and other supplies needed to collect and analyze patient samples, Association of American Medical Colleges CEO David Skorton said Monday in a letter to the White House.