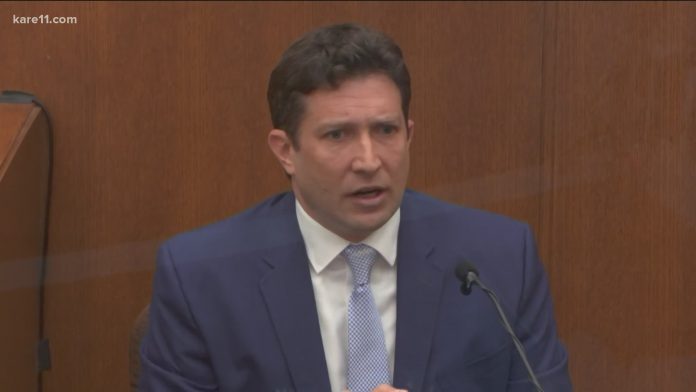 Dr. Jonathan Rich, retained by the prosecution as a heart expert, said there was “absolutely no evidence” that Floyd had a negative heart condition.

“Every indicator is that Mr. Floyd had actually an exceptionally strong heart,” testified Rich, a cardiologist at Northwestern Memorial Hospital in Chicago.

Bystander and surveillance video showed Chauvin and two other officers pinning Floyd, a Black man, facedown on the street for nine minutes and 29 seconds on May 25, 2020. Chauvin, who is white, knelt on Floyd’s neck the entire time, even after Floyd ceased moving and breathing.

Chauvin has been charged with second-and third-degree murder as well as second-degree manslaughter.

Chauvin’s attorney, Eric Nelson, has argued that Chauvin’s actions did not cause Floyd’s death. Instead, Nelson has claimed, factors contributing to Floyd’s death include heart disease, high blood pressure, and drug use.

Rich testified Monday that he saw no evidence that Floyd died due to a preexisting heart condition or from an overdose of fentanyl or methamphetamine, two substances present in Floyd’s system at the time of his death.

Like several other doctors who have testified during the trial, Rich said he believes Floyd died as a result of asphyxia, or a low level of oxygen.

“Floyd died from a cardiopulmonary arrest,” Rich testified. “It was caused by low oxygen levels. And those low oxygen levels were induced by the prone restraint and positional asphyxiation that he was subjected to.”

He added that he believed Floyd’s death was “absolutely preventable” and outlined several moments where Chauvin and the other officers could have saved his life by repositioning him or initiating chest compressions.