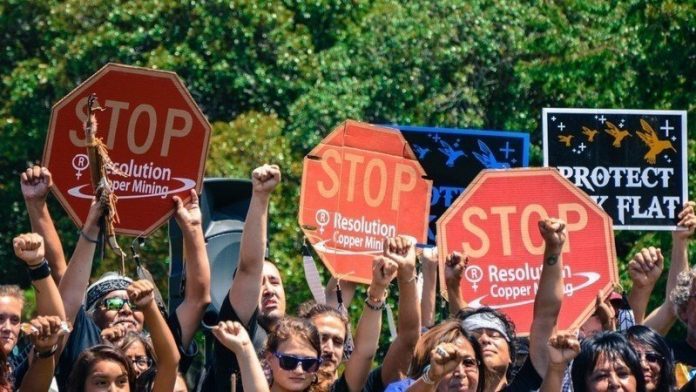 As one of its last acts, the Trump administration has set in motion the transfer of sacred Native American lands to a pair of Anglo-Australian mining conglomerates.

The 2,422-acre Arizona parcel called Oak Flat is of enormous significance to the Western Apache and is now on track for destruction by what is slated to be one of the largest copper mining operations in the United States.

Steps for the controversial land transfer from the US government, which owns the land, to the miners were completed on Friday morning when a final environmental assessment was published. The government must soon transfer title to the land.

Native Americans in the area have compared it to historical attacks on their tribes. “What was once gunpowder and disease is now replaced with bureaucratic negligence,” said Wendsler Nosie, founder of activist organization Apache Stronghold and a member of the Apache band descended from Geronimo. “Native people are treated as something invisible or gone. We are not. We don’t want to be pushed around anymore.”

The move comes after the administration sped up the environmental approval process for the transfer by a full year. During a meeting with environmental groups, regional Forest Service officials attributed the accelerated timeline to “pressure from the highest levels” of the US Department of Agriculture, though the government says it is only because the work was finished more quickly than expected.

The recipient of the land is a firm called Resolution Copper, which was set up by the miners Rio Tinto and BHP Billiton.

“The Forest Service is clearly jumping through flaming hoops to get this done for Rio Tinto before Trump leaves office,” said Randy Serraglio, conservation advocate with the Center for Biological Diversity. He called it “a callous betrayal of Native people who value the land as sacred.”

Last May, Rio Tinto blasted a sacred Aboriginal site in western Australia’s Juukan Gorge. The widespread public outcry and investor revolt over the destruction led the Rio Tinto chairman, Simon Thompson, to promise that the company would “never again” destroy sites of “exceptional archaeological and cultural significance” during mining operations.

In December 2014, then-Senator John McCain attached a rider to the 2015 National Defense Authorization Act that paved the way for 2,500 acres of land, including Oak Flat, to be transferred to Resolution Copper. In return, the government would get more than 5,000 acres of land acquired by the company elsewhere in the state, of supposed equal monetary value.

On January 15, the Forest Service released a final environmental impact statement for the Oak Flat land swap and initial mining plan—one of many actions undertaken by the Trump Administration in recent weeks to further an agenda of more easily exploiting natural resources. Under the 2015 rider, the title to the land must now be transferred within 60 days to Resolution Copper, which is majority-owned by Anglo-Australian mining giant Rio Tinto.

But Nosie and others are fighting the move. Apache Stronghold, a nonprofit organization comprised of mine opponents, filed a lawsuit on January 12 in U.S. District Court in Phoenix challenging the land transfer on the grounds that the giveaway of Oak Flat “violates the Religious Freedom Restoration Act and Apaches’ constitutional rights to religious freedom, due process, and petition and remedy, and is a breach of trust and fiduciary duties,” according to a statement.

The group also filed an emergency lien on the land, seeking to retain possession of it, on January 13. In the lien, Apache Stronghold argues the “United States of America does not own that land.” They argue that an 1852 Treaty between the Apache and the United States gives the Apache rights to the site. “The Treaty was never amended or rescinded,” the lawsuit states.

In a third legal action, Apache Stronghold asked the District Court to block the publication of the Forest Service’s statement until the other legal matters are resolved. That effort failed.

Oak Flat has been considered sacred for thousands of years, Nosie says, a place for ceremonies and prayer and retreat. “From time immemorial our holy people came to this place to receive blessings,” he says.

Called Chi’chil Bildagoteel in Apache, Oak Flat is listed on the National Register of Historic Places for its spiritual and cultural significance to at least a dozen south-west Native American tribes. It contains hundreds of indigenous archaeological sites dating back 1,500 years and is a place where Apache tribes have performed ceremonies for centuries.

Yet thousands of feet beneath Oak Flat is a copper deposit estimated to be one of the largest in the world and worth more than $1bn. If the mine goes forward as planned, it will consume 11 square miles, including Apache burial grounds, sacred sites, petroglyphs, and medicinal plants.

Unbeknown to tribes and environmental groups who had long opposed mining Oak Flat, the land transfer was passed by Congress and signed by Barack Obama in December 2014 as a last-minute rider to a Department of Defense spending bill.

The legislation calls for giving Oak Flat to Resolution Copper in exchange for 5,736 acres of its privately held land across Arizona that are desirable for recreation or conservation. While conducting its environmental review, the Forest Service acknowledged that the mine will destroy sites sacred to Native Americans but claimed the loss was an unavoidable consequence of the land exchange mandate.

The San Carlos Apache Tribe filed a lawsuit in US district court in Phoenix on Thursday alleging, among other things, that by moving forward with the land exchange the Forest Service is violating the National Historic Preservation Act, the Religious Freedom Restoration Act, and an 1852 treaty between the United States and Western Apache tribes.

On Friday, January 16, 2021, the judge denied a request to delay publication of the environmental assessment and ruled that the transfer could take place in 55 days.

In a separate action this week, Apache Stronghold filed a lien on Oak Flat claiming that the land was owned by the Apache according to the 1852 treaty – under which Oak Flat was deemed a part of the Apache homeland – and the Forest Service did not have legal title to the property.

The Arizona representative Raúl Grijalva and Vermont senator Bernie Sanders also plan to introduce the Save Oak Flat Act in Congress to repeal the land exchange.

Tribes and environmental groups are hopeful Oak Flat can still be preserved. “There are plenty of things an incoming Biden administration can do to stop this,” said Serraglio of the Center for Biological Diversity.

Even if Oak Flat ends up in the hands of Resolution Copper through title transfer “there is no guarantee they will be able to get any of the other federal permits to actually do the mine”.