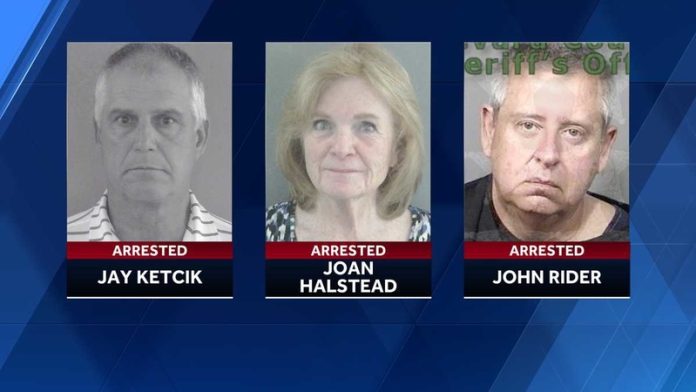 Three residents of The Villages were recently arrested and face charges of casting more than one vote during the 2020 election, according to affidavits.

Joan Halstead, Jay Ketcik and John Rider all face felony charges of casting more than one ballot in an election, arrest reports provided by the office of Ocala-based State Attorney Bill Gladson show.

The complainant against the three was listed as the office of Sumter County Supervisor of Elections Bill Keen. When reached by the Orlando Sentinel, the office declined to comment, citing “an active investigation.”

It is unclear which candidate the three voted for. A spokesperson for Gladson’s office declined to release more details on the allegations Tuesday, December 14, 2021.

“Until we complete initial discovery on the cases that is all I am able to release,” Chief Assistant State Attorney Walter Forgie said.

Halstead is accused of voting in Florida on Oct. 20, 2020, and casting an absentee ballot in New York, according to an arrest report. She was booked into the Sumter County Detention Center on Nov. 29 and released on a $2,000 bond.

Ketcik is accused of casting an absentee ballot in Michigan and also voted by mail in Florida, an arrest report said. Villages records list Ketcik also having a residence in Connecticut.

He turned himself in to be booked at the Sumter detention center on Dec. 8 and was released on a $2,000 bond.