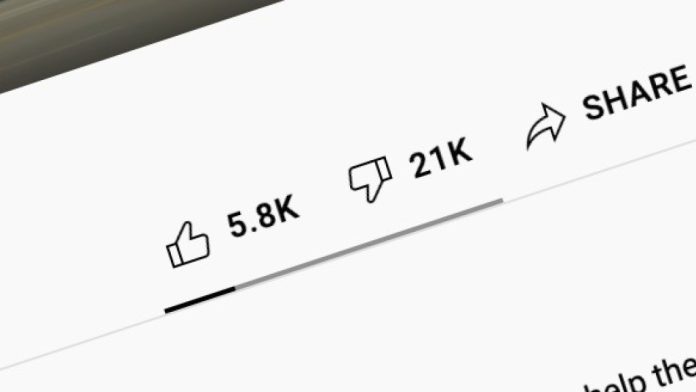 YouTube today announced its decision to make the “dislike” count on videos private across its platform. The decision is likely to be controversial given the extent that it impacts the public’s visibility into a video’s reception. But YouTube believes the change will better protect its creators from harassment and reduce the threat of what it calls “dislike attacks” — essentially when a group teams up to drive up the number of dislikes a video receives.

The company says that while dislike counts won’t be visible to the public, it’s not removing the dislike button itself. Users can still click the thumbs down button on videos to signal their dislike to creators privately. Meanwhile, creators will be able to track their dislikes in YouTube Studio alongside other analytics about their video’s performance, if they choose.

The change follows an experiment YouTube ran earlier this year whose goal was to determine if these sorts of changes would reduce dislike attacks and creator harassment.

At the time, YouTube explained that public dislike counts can affect creators’ well-being and may motivate targeted campaigns to add dislikes to videos. While that’s true, dislikes can also serve as a signal to others when videos are clickbait, spam or misleading, which can be useful.

YouTube said it had also heard from smaller creators and others who were just getting started on the platform that they felt they were being unfairly targeted by dislike attacks. The experiment confirmed this was true — creators with smaller channels were targeted with dislike attacks more than larger creators were.

YouTube declined to share the specific details or the data collected through those experiments when TechCrunch asked, however. But it said it ran its tests for “multiple months” and conducted “in-depth analysis of the impact” as to how the changes affected both users and creators alike.

The company had experimented with different designs for removing the dislike counts, including one where the word “Dislike” appeared underneath the thumbs down button instead of the number of dislikes. This is the design the company has now settled on, which is less of a disruptive change to the row of engagement buttons beneath a video.

The company would not be the first major platform to experiment with the idea of reducing the public visibility of signals that convey user sentiment. For similar mental health-related reasons, Instagram a couple of years ago began tests to hide its Like counts globally. It believed the focus on achieving Likes could be detrimental to its community and may make creators less comfortable expressing themselves on the platform. Ultimately, though, neither Facebook nor Instagram could fully commit to a decision and instead put the power to hide Likes back under users’ control — a move that effectively kept the status quo intact.

YouTube’s changes to the “dislike” count are being introduced at a time when there’s been a public reckoning over big tech and its impact on mental health, particularly when it comes to minors. Companies have been rethinking how their systems are designed to target and influence their user base, as well as what sort of changes they can make ahead of coming regulations. In a number of markets, lawmakers have been dragging in tech execs to hearings — YouTube included — and are crafting legislation aimed at reigning in some of tech’s more problematic elements. Mental health is only one area of regulatory interest, though, along with ad targeting, privacy, algorithmic boosting of misinformation and more.

In YouTube’s case, the company has attempted to get ahead of some of the required changes by implementing increased protections and privacy features for users ages 13 to 17 while also decreasing the monetization potential for “unhealthy” kids’ content. But the larger shift in the market is also pushing companies to consider the other areas of their platforms that are potentially toxic to broad groups of people.

That said, YouTube told TechCrunch today’s removal of the dislike count is not being guided by any regulatory changes, but rather its support for creators.

“We are proactively making this change because YouTube has a responsibility to protect creators, especially smaller creators, from harassment and dislike attacks,” a spokesperson said.

The company, of course, is also rolling this out when the battle for creator talent is becoming hugely competitive among tech giants. Today’s social platforms are establishing funds to retain their top creators amid increased competition, particularly from the growing threat of TikTok. YouTube this year announced a $100 million creator fund to jumpstart its short-form video platform, for example. And, over the past year or so, it’s introduced several new features and policies aimed at improving the creator experience.

The changes to the dislike count will roll out globally across YouTube’s platform starting today, including all devices and the web.