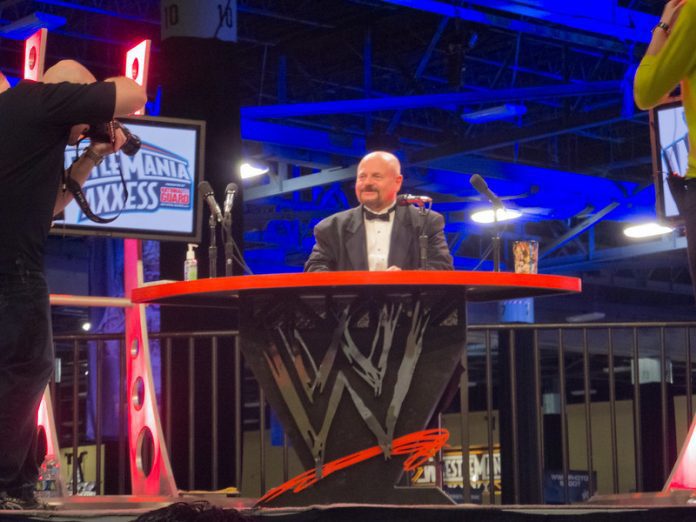 Howard Finkel, the legendary ring announcer and WWE Hall of Famer has passed away, the company announced Thursday, April 16, 2020. He was 69.

Finkel, known as “The Fink,” made his debut at Madison Square Garden in 1977 when WWE was known as WWWF. He became a full-time announcer two years later, and when WWE was established in 1980, Finkel became the first employee, as noted by WWE chief brand officer Stephanie McMahon in a tweet.

“Howard’s voice is iconic & recognized by generations of fans. He will be missed,” McMahon tweeted.

Finkel would mark championship victories with his signature call, “and Nnneeeww world champion!” and he was recognized for his dedication to the wrestling industry when he was inducted into the WWE Hall of Fame in 2009.

Finkel, a native of Newark, New Jersey, even got to get in the ring himself when he fought against manager Harvey Wippleman in 1995 and helped shave Jeff Jarrett’s head in a “Hair vs. Hair” match in 1998, according to WWE.

“When considering the greatest ring announcers in the history of sports and sports=entertainment, you’d be hard-pressed to name one better than Howard Finkel,” WWE said on its website. The company did not reveal the cause of his death.

“Howard (Finkel) was on Team Hogan through the good and bad times,” WWE Hall of Famer Hulk Hogan tweeted. “Even when I was on the outs Howard would call on a consistent basis to tell me to always keep my head up.”

“I’ll never forget the last few times I saw him,” WWE superstar Kevin Owens tweeted. “The excitement he still had for the industry, the genuine concern he showed when asking about how my family was doing despite his own declining health… I’m so grateful I got to know him.”

News of Finkel’s death is another blow to what has been a rough week for WWE.

On Wednesday, the company released several of its Superstars in an effort to cut back on spending during the coronavirus pandemic. Among those let go were Drake Maverick, Curt Hawkins, Sarah Logan, and Epico.