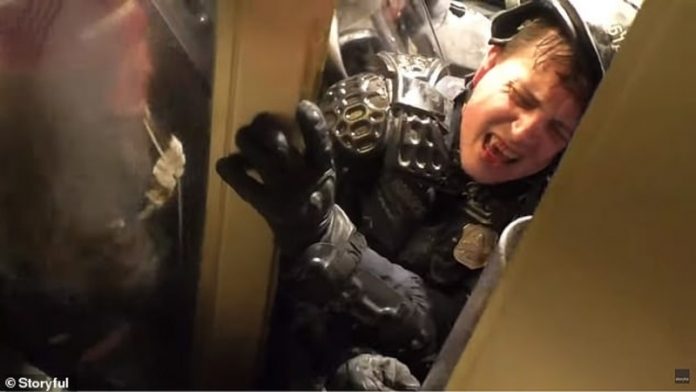 A disturbing video has emerged showing a Capitol Police officer with blood on his face screaming for help while being crushed by a throng of angry Trump supporters storming the US Capitol on Wednesday.

The young cop in the video is pinned between a metal door and a riot shield wielded by the intruders who had snatched the protective equipment from the police.

He wears a pained expression on his face and cries out ‘Help!’ as blood drips from his mouth.

The atmosphere in the entryway is that of total chaos, with hundreds of people screaming and shoving while documenting the melee on their phones. 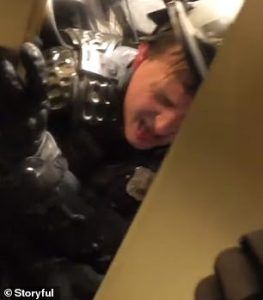 The officer, who has not been identified, was among a contingent of Capitol Police officers equipped with riot gear who were tasked with defending the west side of the Capitol building from a heaving crowd of marauding MAGA protesters.

The besiegers, many of them sporting hats and flags emblazoned with Trump’s name of his signature campaign slogan, Make America Great Again,’ used the officers’ own shields to push their way through the line of defense.

The video shows them working together while chanting ‘Heave-ho’ as they attempt to overpower the officers.

The outnumbered and overwhelmed cops use pepper spray and their batons to beat back the attackers, some of whom are seen also carrying batons and canisters of what appears to be mace.

It is not clear from the video if the batons being used by the rioters were stolen from the police or brought to the rally from home.

One of the invaders is heard telling officers that they need to arrest the ‘traitors,’ and adds: ‘we don’t wanna hurt you guys.’

The attack on the US Capitol claimed five lives, including that of officer Brian Sicknicky, 42, 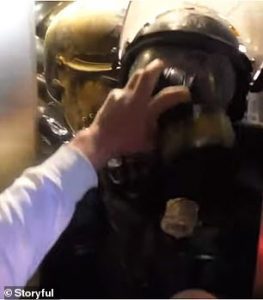 who was struck in the head by a fire extinguisher during the riot and died from his injuries a day later.

The violent rampage that has shocked the world and led to calls for Trump to step down or be removed from office two weeks before the end of his term forced the resignations of three top Capitol security officials over the failure to stop the breach. It has led lawmakers to demand a review of operations and an FBI briefing over what they called a ‘terrorist attack.’

Protesters were egged on by Trump during a rally near the White House earlier Wednesday to head to Capitol Hill, where lawmakers were scheduled to certify Joe Biden’s presidential victory.

The mob swiftly broke through police barriers, smashed windows and paraded through the halls, sending lawmakers into hiding.

One protester, a woman from California, was shot to death by Capitol Police, and there were dozens of arrests. Three other people died after ‘medical emergencies’ related to the breach.

Sund had defended his department’s response to the storming of the Capitol, saying officers had “acted valiantly when faced with thousands of individuals involved in violent riotous actions.”

Lawmakers from both parties pledged to investigate and questioned whether a lack of preparedness allowed a mob to occupy and vandalize the building. The Pentagon and Justice Department had been rebuffed when they offered assistance.

are seen in the video using pepper spray to repel the attack, only to be struck with battons