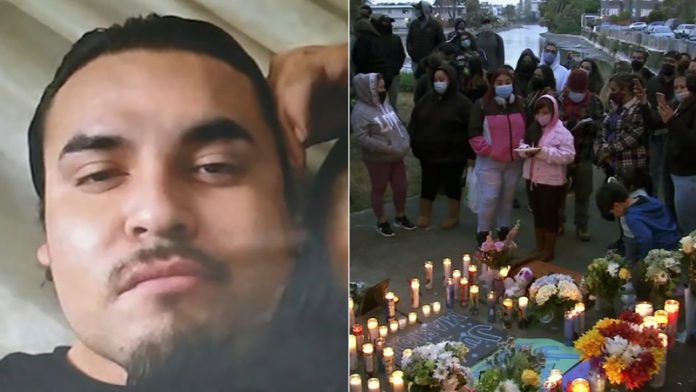 Police released footage of the events leading up to the death of a Latino man in Alameda, California, showing officers kneeling on the man’s back and shoulder until he became unresponsive. The video contradicts officials’ original account of the incident.

Mario Gonzalez, a 26-year-old Latino man, died on the morning of April 19 after what police claimed was a “scuffle” and “physical altercation” as they attempted to restrain him, followed by a “medical emergency.”

But body camera footage released on April 27, 2021, Tuesday afternoon after an outcry from Gonzalez’s family and the public did not show him being violent or fighting officers at any point.

Instead, in the video, officers approached Gonzalez, who was standing alone in a park with some bottles of alcohol in a basket. Gonzalez calmly spoke with officers for nearly nine minutes before they attempted to place his hands behind his back. Police pinned him facedown on the ground and at least two officers appeared to get on top of his back, one kneeling on his shoulder, for about five minutes until Gonzalez became unresponsive.

Police said Gonzalez died at the hospital, but the video showed that he had stopped breathing on-site and that one officer declared “no pulse” shortly after officers began CPR.

Three officers involved have been placed on paid administrative leave.

In a press conference earlier on Tuesday, members of Gonzalez’s family, who had privately viewed the footage, said Gonzalez was “compliant and they continued to pin him down.”

“Alameda police officers murdered my brother Mario,” Gonzalez’s brother Gerardo said, noting that his brother was in the park “not bothering anyone” and that “at no point was he violent.”

“Everything we saw in that video was unnecessary,” he added. “APD took a calm situation and made it fatal.”

“Police killed my brother in the same manner that they killed George Floyd,” he said.

In the video, Gonzalez could be heard groaning under the weight of the police officers on top of him while he continued to respond to their questions about his name and birth date.

“Please don’t do it,” Gonzalez said at one point, and then: “I’m sorry,” followed by screams and groans. One officer answered: “I forgive you.”

The police report made no mention of officers kneeling on Gonzalez’s back for minutes until he lost consciousness.

Similarly, when Minneapolis police officer Derek Chauvin murdered Floyd last year, police had described the death as a “medical incident,” neglecting to mention that Chauvin had kneeled on Floyd’s neck for nine minutes as Floyd repeatedly said he couldn’t breathe.

The Alameda County Sheriff’s Office and District Attorney’s Office are conducting investigations into Gonzalez’s death. City officials have hired an outside investigator to do so as well.

The Gonzalez family is demanding an entirely independent investigation and that the officers be identified, fired, and prosecuted. Their attorney Julia Sherwin is an expert in restraint asphyxiation and was a consultant in Chauvin’s prosecution.

At Tuesday’s press conference, Gonzalez’s mother, Edith Arenales, said that Gonzalez had a four-year-old son and took care of his younger 22-year-old brother, who was autistic.

“They broke my family for no reason,” Arenales said, adding that she “cannot sleep.” She said even if her son was drunk, “they don’t have the right to kill him. We’re humans.”