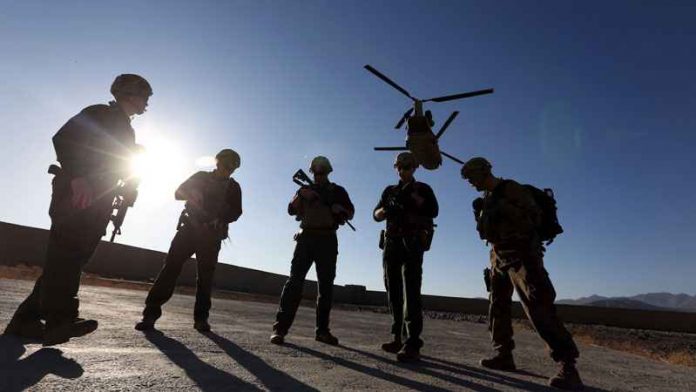 It was a blockbuster story about Russia’s return to the imperial “Great Game” in Afghanistan. The Kremlin had spread money around the longtime central Asian battlefield for militants to kill remaining U.S. forces. It sparked a massive outcry from Democrats and their #resistance amplifiers about the treasonous Russian puppet in the White House whose admiration for Vladimir Putin had endangered American troops.

But on Thursday, April 15, 2021, the Biden administration announced that U.S. intelligence only had “low to moderate” confidence in the story after all. Translated from the jargon of spyworld, that means the intelligence agencies have found the story is, at best, unproven—and possibly untrue.

“This information puts a burden on the Russian government to explain its actions and take steps to address this disturbing pattern of behavior,” the official said, indicating that Biden is unprepared to walk the story back fully.

Significantly, the Biden team announced a raft of sanctions on Thursday. But those sanctions, targeting Russia’s sovereign debt market, are prompted only by Russia’s interference in the 2020 election and its alleged role in the SolarWinds cyber espionage. (In contrast, Biden administration officials said that their assessment attributing the breach of technology company SolarWinds to hackers from Russia’s Foreign Intelligence Service was “high confidence.”)

“We have noted our conclusion of the review that we conducted on the bounties issue and we have conveyed through diplomatic, intelligence, and military channels strong, direct messages on this issue, but we are not specifically tying the actions we are taking today to that matter,” a senior administration official told reporters in reference to the bounty claims.

According to the officials on Thursday’s call, the reporting about the alleged “bounties” came from “detainee reporting” – raising the specter that someone told their U.S.-aligned Afghan jailers what they thought was necessary to get out of a cage. Specifically, the official cited “information and evidence of connections to criminal agents in Afghanistan and elements of the Russian government” as sources for the intelligence community’s assessment.

The senior Biden official added on Thursday that the “difficult operating environment in Afghanistan” complicated U.S. efforts to confirm what amounts to a rumor.

There were reasons to doubt the story from the start. Not only did the initial stories emphasize its basis on detainee reporting, but the bounties represented a qualitative shift in recent Russian engagements with Afghan insurgents. Russian operatives have long been suspected of moving money to various Afghan militants: an out-of-favor former Taliban official told The Daily Beast on the record that Russia gave them cash for years. But the Russians had not been suspected of sponsoring attacks on U.S. forces outright – an escalation that risked confrontation with the U.S., and occurring long after it could have made a difference in the war.

As well, there seemed to be no “causative link” to any actual U.S. deaths, in the judgment of Gen. Frank McKenzie, the senior U.S. general for the Middle East and South Asia. Former U.S. diplomats and intelligence officers told The Daily Beast last summer that they viewed the bounties account skeptically. One retired diplomat suspected, “someone leaked this to slow down the troop withdrawal.”

Rarely discussed was the main reason to believe the story: the CIA actually did fund Afghan guerillas to kill Russian forces during the Soviet occupation of Afghanistan of the 1980s.

The Pentagon said at the time its massive intelligence apparatus, which includes both battlefield intelligence and the world’s most sophisticated surveillance network, did not generate the bounties story. In September, McKenzie said that the intelligence remained uncorroborated. “It just has not been proved to a level of certainty that satisfies me,” he told NBC News.

But Democrats ran with the election-time story. Then-candidate Biden called it a “horrifying revelation” if true. The senior Democrat on the Senate Foreign Affairs Committee, Robert Menendez (D-NJ), introduced a measure to sanction Russia for the alleged bounties. Congressional Democrats claimed to have been insufficiently briefed on the account, which the Trump White House called a “hoax,” and suggested there was a cover-up underway. When Trump himself denied being briefed on the story, House intelligence committee chairman Adam Schiff (D-CA) remarked, “Is this an issue where they cannot tell the president things he doesn’t want to hear when it comes to Vladimir Putin and Russia?”

Added House Majority Leader Steny Hoyer (D-MD) in June, “I think we knew the White House perspective, what we need to know is the intelligence perspective.” Now he knows.