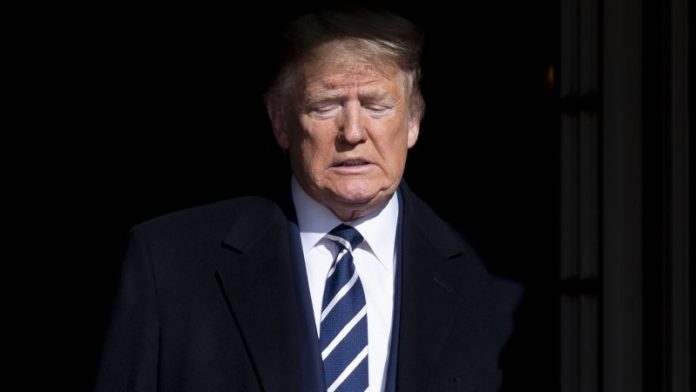 Trump announced he was launching a new media company, Trump Media & Technology Group, and its “Truth Social” app on Wednesday. The “Truth Social” app will begin a beta launch for “invited guests” in November, with a nationwide rollout planned for early 2022, according to a press release. 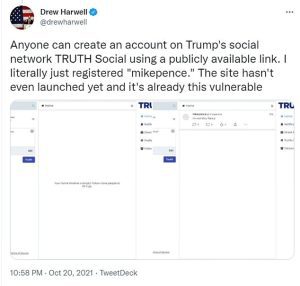 But people were able to sign up to create accounts using a publicly available link, Drew Harwell, a technology reporter for The Washington Post, said on Twitter late on Wednesday, October 20, 2021.

“I literally just registered ‘mikepence.’ The site hasn’t even launched yet and it’s already this vulnerable,” Harwell added. In a subsequent tweet, he revealed that account had been suspended.

However, it’s not clear if that account belongs to the former president. 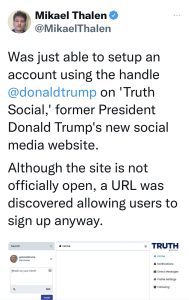 Meanwhile, Mikael Thalen, a reporter for The Daily Dot, tweeted that he was able to create an account using the handle @donaldtrump before the public domain for the site was taken down.

“Was just able to setup an account using the handle @donaldtrump on ‘Truth Social,’ former President Donald Trump’s new social media website,” Thalen tweeted. “Although the site is not officially open, a URL was discovered allowing users to sign up anyway.”

In a follow-up tweet, Thalen added: “For those asking, the public domain for what appeared to be the mobile beta of Trump’s new social media platform ‘Truth Social’ has been taken offline. I did manage to grab a screenshot of the Account Settings menu before access was blocked.”

In a statement, Trump said his goal in launching Trump Media & Technology Group and the “Truth Social” app is to create a rival to the Big Tech companies that expelled him after the deadly insurrection at the U.S. Capitol on January 6.

“I created TRUTH Social and TMTG to stand up to the tyranny of Big Tech,” he said. “We live in a world where the Taliban has a huge presence on Twitter, yet your favorite American President has been silenced. This is unacceptable.”

Trump had spoken about launching his own social media site since he was banned from Twitter, previously his favorite megaphone, over the risk of inciting violence. He also remains indefinitely suspended from other sites, including Facebook, Instagram and YouTube.

In May, he unveiled a new section on his existing website called “From the Desk of Donald J. Trump.” The blog was soon abandoned after a reported decline in visitors.