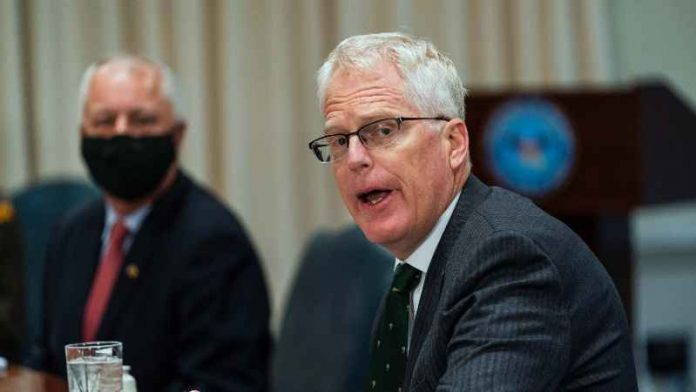 In testimony before the House this week, Capitol Police and D.C. National Guard officials acknowledged that by Jan. 4 they understood that “… the January 6th event would not be like any of the previous protests held in 2020. We knew that militia groups and white supremacist organizations would be attending. We also knew that some of these participants were intending to bring firearms and other weapons to the event. We knew that there was a strong potential for violence and that Congress was the target.”

On that same day, former acting Defense Secretary Christopher Miller issued a memo to the secretary of the Army placing some extremely unusual limits on National Guard forces for that event. It’s not a to-do list. It’s a list of thou shalt nots. A long list. A list that says guard forces can’t arrest any of the pro-Trump protesters, or search them, or even touch them. And that’s just for starters.

The full memo shows that the D.C. Guard did receive a request from the D.C. government for guard presence during the Jan. 6 event. Miller responds promptly to go ahead, so long as the soldiers are given no weapons, no body armor, and no helmets. They can bring agents like pepper spray or flashbangs. They can’t share any gear with Capitol Police or Metro D.C. Police. They can’t … really do much of anything.

When initial reports indicate that the handful of National Guard forces that were deployed to D.C. on that day were dedicated to 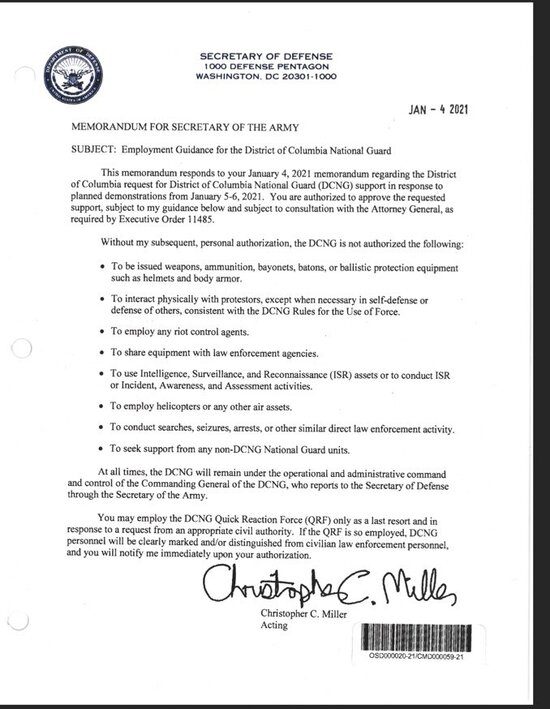 directing traffic several blocks away from the area of the Trump rally, it may simply be because that’s the only thing they could find for them to do considering the restrictions that were given. It’s clear that these restrictions would have absolutely prevented any guard forces from trying to protect any location.

In addition to this memo, another grim document of the Jan. 6 insurgency emerged on Thursday. As The New York Times reports, body cam footage (deliberately not inserted here) from officers on the Capitol steps was used in court when bringing charges against ael Foy, a Michigan man who attacked the police with a hockey stick. In addition to Foy’s attack, the minute of video captures a grisly scene—the moment when 34-year-old Rosanne Boyland is trampled to death on the Capitol steps by fellow insurgents rushing forward to join the attack on police.

At least one person in the crowd notices what is happening and shouts “Save her!” But the wave of insurgents battering at police with flagpoles and lengths of pipe never pauses. Only seconds later, Boyland’s friend Justin Winchell shouts “She’s gonna die! She’s dead!” He attempts to get help from those around him, but what he gets is a face full of chemical agent that rioters behind him are aiming at the police. Boyland’s death is far from the only moment of shocking violence in the video, as insurgents scream that they will kill the police, and officers are toppled and dragged down the stairs. By the end of the brief video, the police are down, as the Trump supporters kick them and beat them over and over. The wonder isn’t that someone died. It’s that it wasn’t more.

Considering the limits that Miller set on National Guard forces—including no helmet and no body armor—it’s a good thing that none of them were present at the Capitol. They would not have survived.