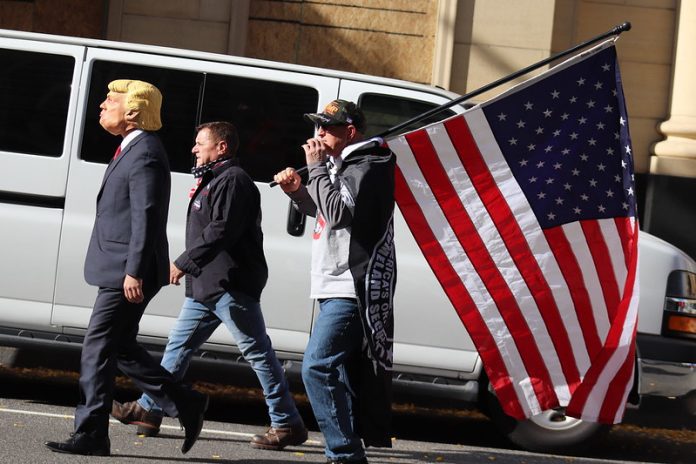 Donald Trump is still refusing to concede the 2020 election to President-elect Joe Biden — and his most fervent supporters are on the same page.

As part of Trump’s last-ditch effort to overturn Biden’s victory, he and his supporters (in and out of Congress) have been hyping Congress’s expected certification of Biden’s Electoral College victory Wednesday as the final opportunity to “stop the steal.” Trump fans planned a slate of protests near the Capitol building in Washington, DC, starting with rallies on Tuesday. Yet another will take place on Wednesday, at which Trump himself says he will speak.

And they’re not off to a great start. 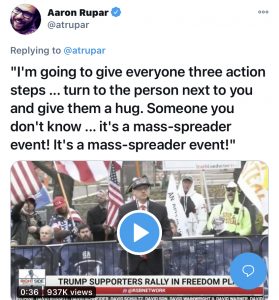 Trump fans began gathering on Tuesday in Freedom Plaza and outside the Capitol, where recently pardoned Trump ally Roger Stone spoke. At the Freedom Plaza event, a variety of fringe far-right speakers alternately profanely denounced Antifa, said George Soros “owns” Supreme Court Justice John Roberts, described the coronavirus as “fake” — and, in one especially shocking moment, even encouraged rally attendees, who gathered mostly without masks despite the coronavirus pandemic, to hug each other.

“You need to pray for our vice president to look up to God and say, ‘I need to make a decision, Lord,’ and make the right decision for our country,” Lindell said, alluding to Mike Pence’s role overseeing Wednesday’s Electoral College certification process. “You don’t have a [civil] 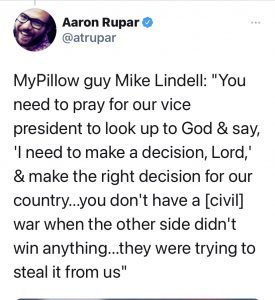 war when the other side didn’t win anything … they were trying to steal it from us.” 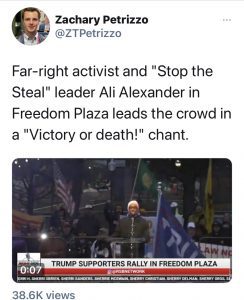 And another speech Tuesday evening featured a “victory or death!” chant.

Trump has heavily promoted the Wednesday portion of the event, touting it on Twitter as a “BIG Protest Rally” that “could be the biggest event in Washington, DC, history” — one aimed at pressuring members of Congress to stop the “steal” of the election from him. On Tuesday afternoon, he tweeted that he plans to speak to his supporters at 11 am on Wednesday. In other tweets, he echoed the rhetoric speakers at the rally used by calling Antifa “a Terrorist Organization” and cited the size of the gatherings to put pressure on Republican senators who so far have not joined his effort to overthrow the election.