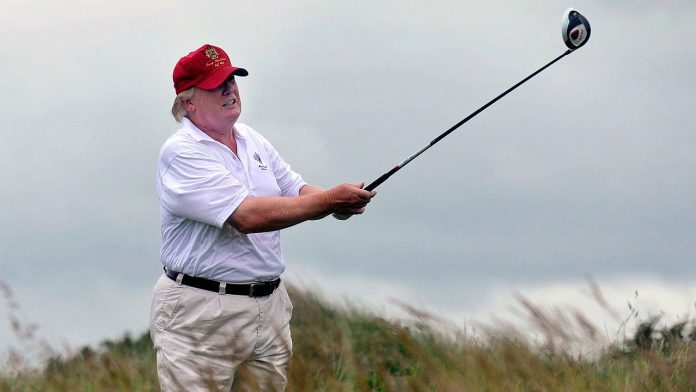 CNN’s Shimon Prokupecz reported that Donald Trump skipped tweeting any comments about the passing of civil rights icon Rep. John Lewis on Saturday morning, saying the president “arrived at his golf club in Sterling, VA at 9:09 am.”

Prokupecz tweeted, “President Trump arrived at his golf club in Sterling, VA at 9:09 am, according to pool reports. Neither the President nor the White House has issued a statement or responded to request for comment on the passing of John Lewis.”

Since that time the White House has issued an official statement, but the president, known for his Saturday morning Twitter postings skipped saying a word about the revered Democratic lawmaker who passed away late Friday night.

Weijia Jiang @weijia tweeted:
From the pool before reporters left the White House a few minutes ago:

“We saw the President for a few frames before he got into the SUV, wearing a red hat and white polo shirt. We believe Lindsay Graham, wearing an almost identical outfit, got in on the other side.”

Andrew Feinberg @AndrewFeinberg tweeted:
NOW: John Lewis is dead. President @realDonaldTrump has not said a word about it, and now he is headed to his golf club with @LindseyGrahamSC.

Art Martin @gartmartin9 tweeted:
Trump and Graham have an urgent meeting with their Russian handlers at the golf course. That’s the priority.
But better Trump just keeps silent about John Lewis. we don’t want to hear from him.

Joe Lockhart @joelockhart tweeted:
Is @realDonaldTrump so racist and captive to racism that he can’t acknowledge the death of John Lewis?

BootsieO @BootsieO tweeted:
Disgraceful!! @harrisonjaime for #SC senator. @LindseyGrahamSC will have plenty of time to #kisstRumpsArse and play golf next year. #JohnLewis had so much to offer and @realDonaldTrump shouldn’t utter his name as it would be an insult to his remarkable life! #BLM

Trump: unable to even tweet a remembrance of John Lewis, one of the legends of the civil rights movement.

Let Trump go play golf or try to sell y’all beans. Allow the adults to carry on the conversation.

Proud Navy Veteran @naretevduorp tweeted:
On the day, as we celebrate the life of civil rights icon John Lewis.

On this day, @realDonaldTrump plays golf.

Howard @HowardA_Esq tweeted:
Trump is marking the death of John Lewis as he does every tragedy:

He grifting a-hole. Golf at Pebble Beach for once, you criminal POS.

Edward-Isaac Dovere @IsaacDovere tweeted:
Lewis was very critical of Trump and called him illegitimate, which provides a rationale for ignoring him. But this is what happens when many usual functions of the country become—for him, for his supporters and for his opponents—become the refractions of Trump he wants.

The result is Donald Trump is a president who interrupts the State of the Union to give the Medal of Freedom to Rush Limbaugh, but didn’t have his press office put out a basic statement on John Lewis before heading to one of his golf properties for the 370th time as president.

Raw Story: Trump slammed for ignoring death of John Lewis and heading out to golf with Lindsey Graham