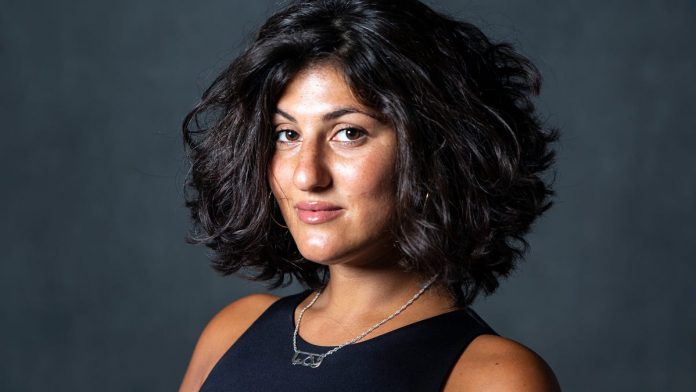 In a case that’s drawn international condemnation from free press advocates, the trial began Monday for an Iowa journalist who is facing criminal charges related to her reporting on a Black Lives Matter protest last summer.

Andrea Sahouri, a 25-year-old reporter for the Des Moines Register, was pepper-sprayed and arrested while reporting on a May 31 protest sparked by the death of George Floyd.

While Sahouri insists she repeatedly identified herself as press to police while covering the clashes, prosecutors are arguing she did not, and have charged her with failure to disperse and interference with official acts.

Sahouri was a “member of a group … that assembled to protest allegations of racism and police brutality,” police allege in the charging documents, continuing: “This group was engaging in assaultive conduct, the intimidation of people and the destruction of property.”

“I’m just doing my job as a journalist,” Sahouri said in a video released after the arrest, explaining she identified herself multiple times but was ignored by police.

If convicted on the misdemeanor charges, Sahouri could be sentenced to 30 days in jail and face fines of $625 for each offense.

The Des Moines Register, in an editorial published last month, labeled the case a “violation of free press rights and a miscarriage of justice,” arguing that Sahouri was “doing her constitutionally protected job at the protest.”

The newspaper is funding Sahouri’s legal defense, which is led by former U.S. Attorney Nick Klinefeldt.

Prosecutors have pressed forward with the case despite widespread backlash over what the U.S. Press Freedom Tracker said could be the first trial of a working journalist in the U.S. since 2018. “This is outrageous,” Amnesty International said, demanding the charges be dropped. “Reporting at a protest scene as a working member of the media is not a crime. It is a right that must be protected.”

Bradley Kinkade, an assistant Polk County attorney, argued at a pretrial hearing Friday that Sahouri’s employment as a reporter is “irrelevant to her charges.” “This is a standard misdemeanor trial,” Kinkade said.

Sahouri was one of 126 journalists arrested or detained during last year’s unrest, though most weren’t charged or saw their charges dropped, according to the Press Freedom Tracker. At least 14 journalists are still facing charges after the record number of arrests in 2020, labeled by the press freedom group as an “unprecedented press freedom crisis engulfing the United States.”