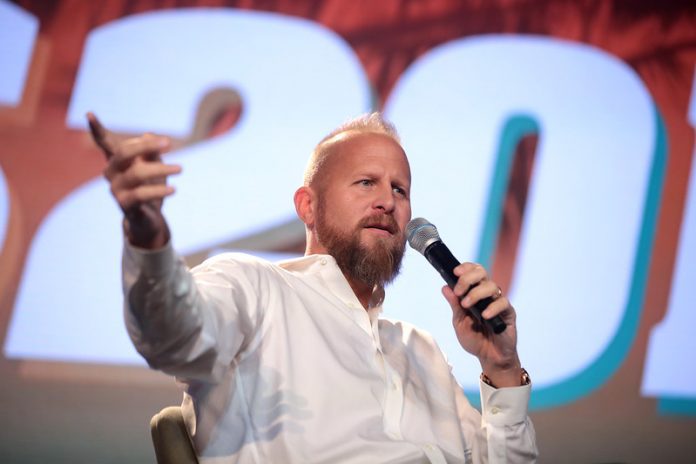 Donald Trump’s campaign still won’t clarify the status of its erstwhile campaign manager Brad Parscale, who was taken into custody by police outside of his Florida home over the weekend. But the campaign is quietly purging its website of Parscale’s visage.

Since Tuesday, September 28, 2020, the campaign has removed a video of Parscale from the homepage of its “Army for Trump” election monitoring operation. It also deleted a page on the main campaign website featuring a video of Parscale and Lara Trump, the president’s daughter-in-law, and senior campaign adviser. The video of their discussion billed as a Q&A on the state of the campaign, has also been removed from YouTube. Those deletions were first flagged on Twitter by the writer Jeryl Bier.

One Trump campaign page discussing the event with Lara Trump remained online as of Wednesday morning. After The Daily Beast flagged it in a comment request sent to the campaign, that page was removed as well.

The campaign did not respond to that comment request, which sought to clarify Parscale’s role with the Trump reelect and determine whether he remains an employee or consultant. He was Trump’s campaign manager until July when he was replaced by former White House political director Bill Stepien. Parscale remained in a senior role for the campaign.

The apparent effort to scrub Parscale from campaign web properties comes in the wake of a police incident outside his home on Sunday. According to the police report, Parscale’s wife called authorities to report that he was threatening to commit suicide, had loaded a firearm in front of her, and had physically assaulted her during a prior domestic dispute.

Body camera footage showed police tackling and handcuffing Parscale as they detained him under a Florida law that allows authorities to involuntarily commit someone who is believed to be a danger to himself or others.

The Trump campaign initially released a statement saying “Our thoughts are with Brad and his family as we wait for all the facts to emerge.” It followed up with another statement that used the incident to criticize the president’s political opponents. “The disgusting, personal attacks from Democrats and disgruntled RINOs have gone too far, and they should be ashamed of themselves for what they’ve done to this man and his family,” Tim Murtaugh, the campaign’s communications director, said.

The incident marked a dramatic downfall for a man widely credited with an instrumental role in Trump’s 2016 election victory. Parscale, a digital vendor from Texas, was plucked out of obscurity and installed as the campaign’s digital director. His profile was even high enough that the Trump campaign purchased about $340,000 in Facebook and Instagram ads that ran on Parscale’s own pages on those sites.

But Parscale’s central role on the 2020 campaign, in particular, has also drawn criticism and scrutiny, particularly over tens of millions of dollars in funds spent through entities owned, run, or otherwise tied to Parscale. In June, the Trump campaign reportedly initiated an internal audit to determine whether he had misspent significant amounts of campaign money.

That scrutiny has also targeted Parscale’s personal life and his increasingly lavish spending on homes, boats, and sports cars. Parscale and the campaign have consistently denied that he misspent campaign money or used it for personal gain.

In the wake of his detention over the weekend, the Daily Mail reported that Parscale was “under investigation” for pocketing as much as $50 million from the Trump campaign and the Republican National Committee. But the story did not specify who exactly was doing the investigating, and the campaign and the RNC both denied the report.