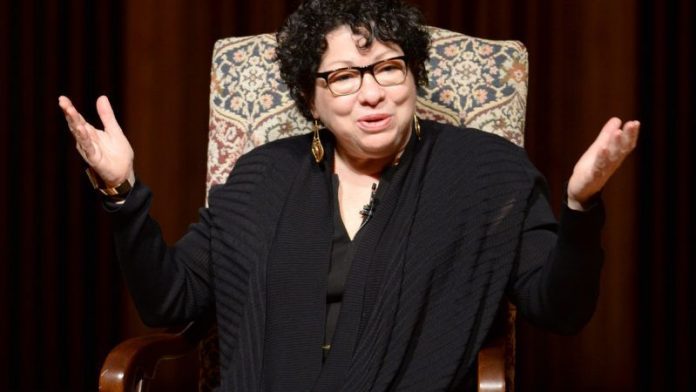 Supreme Court Justice Sonia Sotomayor harshly criticized the Trump administration for a recent spate of federal executions in an opinion published on Friday.

The court ruled 6 to 3 that the execution of Dustin Higgs could go ahead late on Friday, making him the 13th person to be put the death under the Trump administration. Sotomayor wrote a dissent to the majority’s decision. Justices Stephen Breyer and Elena Kagan also dissented.

“After seventeen years without a single federal execution, the Government has executed twelve people since July,” she wrote.

“Today, Dustin Higg will become the thirteenth,” she said. Higgs was executed shortly after the court’s decision was filed.

Sotomayor noted that the U.S. “will have executed more than three times as many people in the last six months than it had in the previous six decades.”

The Trump administration had ended a 17-year pause on federal executions and former Attorney General William Barr pushed ahead with death sentences following the election in November.

Sotomayor said the Department of Justice had created “legal uncertainty” with its 2019 protocol authorizing the executions, saying “the DOJ did not tread carefully.” She also offered criticism of her conservative colleagues on the Supreme Court.

“Throughout this expedited spree of executions, this Court has consistently rejected inmates’ credible claims for relief,” Sotomayor wrote. “The Court has even intervened to lift stays of execution that lower courts put in place, thereby ensuring those prisoners’ challenges would never receive a meaningful airing.”

“The Court made these weighty decisions in response to emergency applications, with little opportunity for proper briefing and consideration, often in just a few short days or even hours,” she said.

“Very few of these decisions offered any public explanation for their rationale.”

“This is not justice,” Sotomayor wrote.

“After waiting almost two decades to resume federal executions, the Government should have proceeded with some measure of restraint to ensure it did so lawfully. When it did not, this Court should have. It has not. Because the Court continues this pattern today, I dissent.”

Higgs was convicted of the deaths of three women in a wildlife refuge in 1996. His lawyers had said executing him would be “arbitrary and inequitable” since Willis Haynes, the man who shot the women, had not received the death penalty.