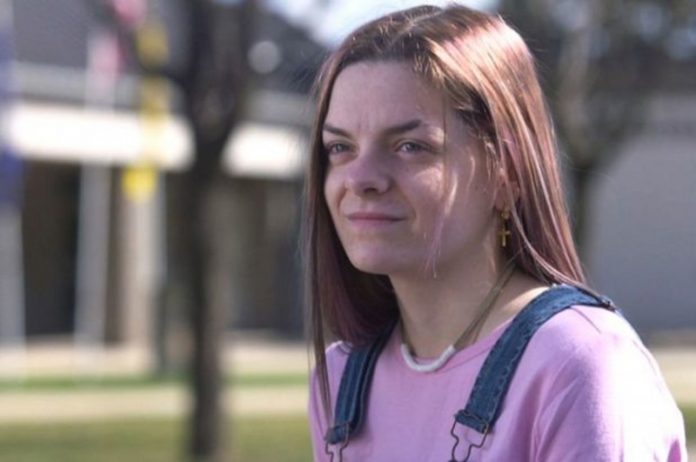 A salty Snapchat posted by a Pennsylvania high school cheerleader has served as a springboard for a legal battle set to play out before the Supreme Court on Wednesday, April 28, 2021, when the justices will weigh whether schools can punish students for speech that occurs off-campus.

Marked by a string of obscenities beginning with the letter “F” and a raised middle finger, the post from Brandi Levy, the cheerleader at the center of the case, has paved the way for the high court to clarify the reach of school officials in policing the conduct of their students.

“The seminal importance of this case is the Supreme Court will determine how far the arm of school authority extends off-campus,” David Hudson, a professor at Belmont Law who works on First Amendment issues, told CBS News. “That’s a vitally important question because right now, school officials, students, parents — really, anyone interested in this issue — really don’t know. The court needs to provide some guidance.”

The dispute before the high court dates back to 2017, after Levy, then a 14-year-old rising sophomore in the Mahanoy Area School District learned she didn’t make her school’s varsity cheerleading team for the second straight season.

In an act of frustration, on a Saturday, Levy posted a self-deleting photo on Snapchat of her and a friend-raising their middle fingers with the caption “f**k school f**k softball f**k cheer f**k everything.” In a second message, Levy wrote “Love how me and [another student] get told we need a year of jv before we make varsity but that’s doesn’t matter to anyone else?”

While photos and messages posted to Snapchat automatically delete after 24 hours, one of Levy’s 250 followers on the app, a fellow cheerleader, took a screenshot of the image and showed it to one of the cheerleading coaches. The coaches decided Levy had violated team and school rules governing student conduct, and she was removed from the cheerleading team for her sophomore year as punishment.

Levy’s parents appealed to the athletic director, principal, district superintendent, and the school board to reconsider the punishment, all of whom sided with the coaches. They filed a federal lawsuit, arguing the discipline for off-campus speech violated their daughter’s First Amendment rights. A federal district court in Pennsylvania sided with Levy and ordered her to be reinstated to the team. The 3rd U.S. Circuit Court of Appeals affirmed, finding the Supreme Court’s landmark ruling in Tinker v. Des Moines doesn’t apply to off-campus speech.

In that case, from 1969, which involved high school students punished for wearing black armbands to protest the Vietnam War, the high court said students do not “shed their constitutional rights to freedom of speech or expression at the schoolhouse gate.” Schools, however, can discipline students for speech that “materially and substantially” interferes with school activities.

In a brief filed with the Supreme Court, lawyers for Levy argued her “Snap” did not contain harassing, intimidating, or threatening speech and was “nothing more than an off-hand, ephemeral expression of frustration on a personal social media platform designed to facilitate such transitory communications.”

“The notion that a school can discipline a student for that kind of spontaneous, non-threatening, non-harassing expression is contrary to our First Amendment tradition, and finds no support in this Court’s student speech cases,” they told the court.

But the Mahanoy Area School District said schools around the nation need clarification from the Supreme Court on the scope of their ability to discipline students for off-campus speech, especially in the digital age and as the coronavirus pandemic drove students across the country to online learning, blurring the lines between on and off-campus.

“The ultimate question is what limits the First Amendment places on schools’ jurisdiction, and Tinker explains that the First Amendment must accommodate both students’ free speech rights and schools’ obligation ‘to prescribe and control conduct in the schools,'” lawyers for the district said in its petition urging the Supreme Court to take up the case. “Schools’ ability to maintain order within the schoolhouse gates should not disappear just because the disruption originates off-campus.”

The Justice Department is siding with the school district in the dispute, but acknowledged that “just because off-campus student speech qualifies as school speech does not necessarily mean that any particular discipline for that speech would comport with the Constitution.” Acting Solicitor General Elizabeth Prelogar told the court while no “universal formulation is possible,” there are specific categories of off-campus speech that may be regarded as school speech, such as speech that threatens the school community or bullies specific individuals or groups.

The legal battle set to play out in Wednesday’s hour-long arguments, to be held remotely by telephone, has brought together a diverse coalition, with conservative legal organizations, religious liberty groups, and nine Republican attorneys general backing Levy and the ACLU. Anti-bullying groups, the Biden administration, and education organizations are siding with the Mahanoy Area School District.

In a friend-of-the-court brief filed with the Supreme Court, the attorneys general from red states argue that while the case presents a “delicate” constitutional question, it is about “non-threatening, non-harassing, off-campus student speech.”

“This Court should not be tempted to turn this case into a textbook example of bad facts making bad law,” they wrote. “For public schools systems, under-policing off-campus student speech rather than over-policing it is undoubtedly the better rule.”

Hudson, who joined a friend-of-the-court brief in the case, said the court is going to have to put some limits on school officials or risk them becoming the “social-media police.” A ruling, he continued, could carve out exceptions for disciplining bullying and harassing conduct that occurs off-campus to address concerns about cyberbullying and threats.

“With the circuit split and courts addressing the question differently, I think finally it was abundantly clear the court needed to lay out some parameters here,” he said. “What type of nexus or connection does there need to be between off-campus speech and what happens at school? If there is a nexus, what standard do we apply?”

A decision from the court is expected by the summer.