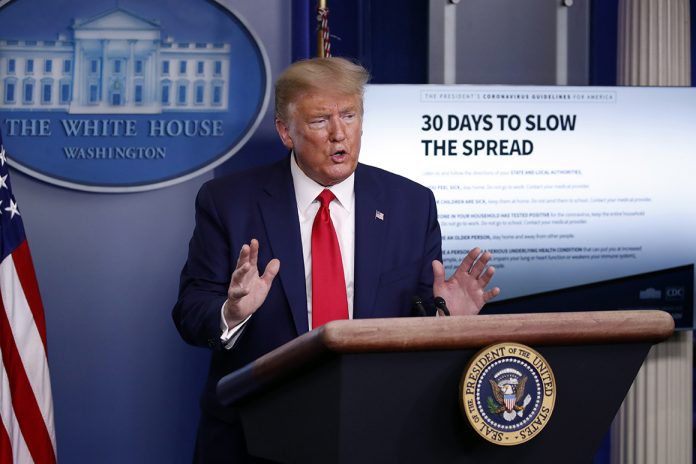 About 40% of US COVID-19 deaths “could have been averted,” according to a new analysis of President Donald Trump’s public health policies.

The report, published by the Lancet Commission, excoriated Trump’s handling of the pandemic and general approach to public health: “He expedited the spread of COVID-19 in the US,” the authors wrote.

“Many of the cases and deaths were avoidable,” they said, adding, “instead of galvanizing the US populace to fight the pandemic, President Trump publicly dismissed its threat (despite privately acknowledging it), discouraged action as infection spread, and eschewed international cooperation.”

The US has recorded about 27 million COVID-19 cases and at least 471,000 deaths, though public-health experts say those official tallies are likely undercounted.

The Lancet report did not place all the blame on Trump’s policies, however; it also points to four decades of “long-standing flaws in US economic, health, and social policy” that compounded inefficiencies in the country’s public-health systems prior to the pandemic.

By the time Trump left office in January, there were more than 400,000 reported COVID-19 deaths in the US. That’s more Americans than the number of US troops killed during World War II.

The US leads the world in total coronavirus deaths, though it does not have the highest COVID-19 deaths per capita.

For their new analysis, the Lancet authors compared the US’s COVID-19 death rate to the average death rate of six other economically advanced nations: Canada, France, Germany, Italy, Japan, and the UK. They weighted those death rates by each country’s population since their sizes vary widely.

They concluded that 40% of the US’s roughly 450,000 coronavirus deaths as of February 4 could have been avoided if the country had handled the pandemic in a similar manner to its wealthy peers. That’s 180,000 lives.

The report added that other countries outperform the US being outperformed in other areas of public health, too. The average life expectancy in the US was 3.4 years lower than the average life in the six countries listed above in 2018. That year, the US had 461,000 excess deaths — more deaths than expected based on historical data — a figure that’s been rising since 1980.

Trump publicly downplayed the threat of COVID-19 and habitually dismissed policy recommendations from top experts — including some from his White House coronavirus task force. In June, his campaign hosted an indoor rally in an Oklahoma arena that could seat 19,000 people.

He “repudiated science, leaving the US unprepared and exposed to the COVID-19 pandemic,” the Lancet authors wrote.

Dr. Anthony Fauci, director of the National Institute of Allergy and Infectious Diseases, told CNN last month that a lack of clear messaging from the federal government “likely did” cost lives last year.

“People were not trusting what health officials were saying,” Fauci added.

In February 2020, Nancy Messonnier, a senior official at the Centers for Disease Control and Prevention, warned that the virus was circulating in American communities and that people should prepare for “severe” disruptions to daily life.

But during the same press conference, Trump told the public that the number of COVID-19 cases would be “close to zero” within a couple of days.

Later, Trump privately told journalist Bob Woodward that he deliberately downplayed the threat of COVID-19 because he didn’t want to cause a panic.

Two of the Lancet report’s authors published a similar analysis of Trump’s health policies in 2018. That report said that Trump’s tax cuts for the wealthy, challenges to the Affordable Care Act, and refusal to give adequate aid to Puerto Ricans following Hurricane Maria all showed how the administration “favors industry and the wealthy and serves to endanger population and planetary health.”

In October, the Lancet also published a commentary describing the administration’s handling of the pandemic as “disastrous,” urging Americans “to embrace change for the better” in the 2020 election.

Other public-health experts have also highlighted the ways Trump’s approach to the pandemic set a poor example for Americans and contributed to the US’s huge case total.

Fauci, meanwhile, criticized Trump’s frequent refusal to wear a mask, which he attributed to Trump’s “macho” attitude in a recent interview with The Atlantic.

“To him, a mask was a sign of weakness,” Fauci told The Atlantic, adding, “the unfortunate aspect of this is that a lot of people in the country took that on as a mantra.”

According to the Lancet report authors, Trump’s refusal to develop a consistent national pandemic strategy across all 50 states “worsened shortages of personal protective equipment and diagnostic tests.”

Similarly, once vaccines were authorized, each state was made responsible for its own distribution. The issue boiled down to the philosophy of Trump’s White House and HHS staff, Jha told Insider.

“They believe deeply that it’s not the role of the federal government to help states in a health crisis, that it’s the job of states to figure this all out on their own,” he said.