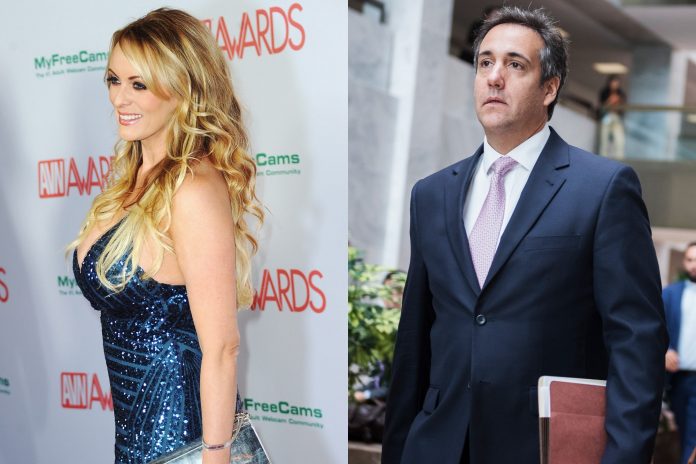 Stormy Daniels in their first-ever interaction after she sued the president in a scandalous lawsuit that once overshadowed his presidency.

The meeting will mark the first time Cohen and Daniels, who are now on the same side of the Trump coin, will have interacted.

Daniels, whose real name is Stephanie Clifford, will open up on what really transpired between her and Trump, with whom she claims she had an affair in 2006.

The alleged relationship had been kept under wraps until 2018 when Daniel publicly claimed she had been offered a six-figure payment two years earlier to keep quiet and sued to void the agreement.

Cohen, 54, who served as Trump’s attorney and ‘personal fixer’ during that time period, was accused of offering Daniels $130,000 in hush money to refrain from disclosing information.

Trump and his supporters denied the president knew about the payment for several years before he acknowledged it on Twitter in May 2018 and said he reimbursed Cohen for the money paid to Daniels.

What followed was a drawn-out legal battle that ultimately resulted in Trump being forced to pay $44,100 in attorney fees to Daniels in 2019.

Meanwhile, Cohen, who was once one of Trump’s most loyal supporters, was handed a three-year sentence after pleading guilty to campaign finance violations, tax evasion, and other crimes.

Cohen had argued that Trump Organization officials disguised the true nature of the payments and it is unfair that he is the only one prosecuted.

He was eventually released to complete the last two years of his sentence at home in May amid coronavirus fears.

He started his podcast Mea Culpa in September on the heels of his book ‘Disloyal: A Memoir’.

Staunch Trump critics Rosie O’Donnell, former White House Director of Communications, Anthony Scaramucci, and Trump’s fired aide Omarosa Manigault Newman, among others, have appeared on his show which is run in a partnership between Audio Up Media and MeidasTouch.