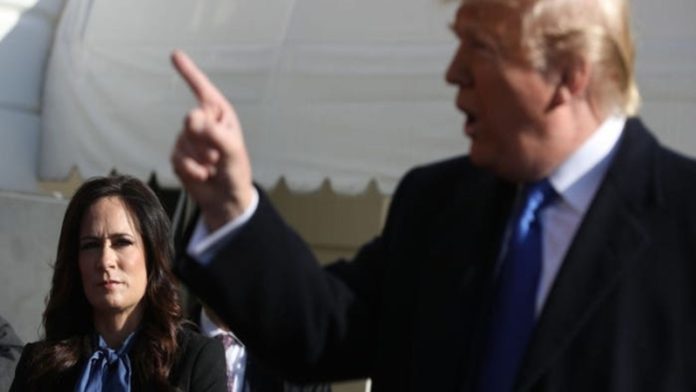 Former White House press secretary Stephanie Grisham said Thursday, January 6, 2022, that more than a dozen of her former Trump administration colleagues plan to meet next week to try and stop former President Donald Trump as he continues to “manipulate people and divide our country.”

“Next week, a group of former Trump staff is going to come together, administration officials are going to come together and we’re going to talk about how we can formally do some things to try and stop him and also, the extremism, that that kind of violence, rhetoric that has been talked about and continues to divide our country,”
Grisham told CNN’s John Berman and Brianna Keilar in an interview on “New Day.”

Grisham, who was also chief of staff to former first lady Melania Trump, declined to reveal who will be joining her in the efforts but said there would be “about 15” of her former colleagues, including some who worked inside the White House. Some of the officials, she said, were junior to her, while others were senior. A few of the officials had “informal chats,” did outreach to others, and conducted “some Zooms, some conference calls,” culminating in the partially in-person formal meeting next week, according to Grisham.

Grisham said she is personally hoping to “travel the country and talk to people who are believers like I once was” and “explain who (Trump) really is,” also calling the former President a “master manipulator.”

“I’m hoping that people will talk to somebody like me or some of these other people who really did believe in Trump and understand you can be proud of his policies, you can still be behind a lot of the America First policies that he implemented, which I am, but it doesn’t have to be him. It just doesn’t have to be this man who has caused such chaos and destruction in the country,” she told CNN.

She said that the group of former Trump officials will discuss “what are the most effective tactics in order to carry that message,” adding that she’s “really hoping for a good fight in 2022.”

Grisham met Wednesday on Capitol Hill with the House select committee investigating the January 6 insurrection. On January 6, she was Melania Trump’s chief of staff at the time, but resigned from her role that day, effectively immediately, as a result of the insurrection, becoming one of the first Trump officials to do so.

Grisham told CNN on Thursday that she spent about an hour with the select committee on Wednesday, “answered every question they asked of me, and I will continue to cooperate with them.”

She confirmed that the committee was interested in what was happening inside the White House as the insurrection was unfolding at the US Capitol on January 6.

She said that she did not know who specifically spoke with Trump on January 6 to try to get him to stop the violence, except that Melania Trump did not try and plead with her husband.

“All I know about that day is he was in the dining room, gleefully watching on his TV, as he often did. ‘Look at all of the people fighting for me,’ hitting rewind, watching it again. That’s what I know,” Grisham said.