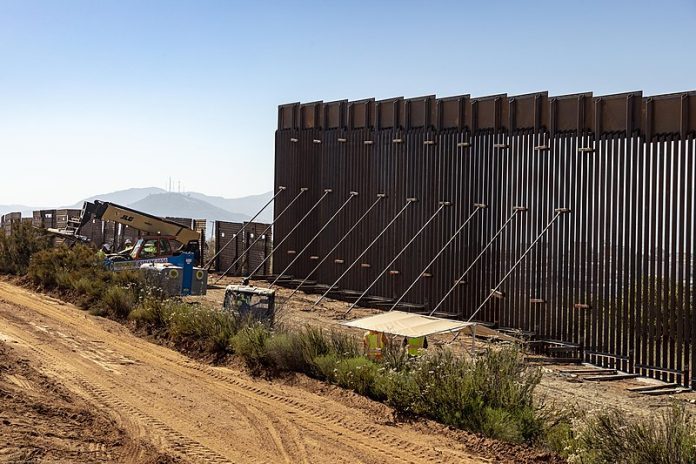 Smugglers sawed into new sections of President Trump’s border wall 18 times in the San Diego area during a single one-month span late last year, according to U.S. Customs and Border Protection records obtained by The Washington Post via a Freedom of Information Act request.

The breaches and attempted breaches were made between Sept. 27 and Oct. 27, according to CBP records, with five of the incidents occurring on a single day, Oct. 10. The agency withheld information about the specific locations of the incidents, citing law enforcement sensitivities. The agency said the average cost to repair the damage was $620 per incident.

The records do not indicate whether the one-month span last year is a representative sample of how frequently people are trying to breach new sections of Trump’s border barrier, which are made of tall steel bollards partially filled with concrete and rebar. The Post reported last November that smuggling crews armed with common battery-operated power tools — including reciprocating saws that retail for as little as $100 at home improvement stores — can cut through the bollards using inexpensive blades designed for slicing through metal and stone.

The Post requested breaching data for the full 2019 fiscal year, which ended Sept. 30, but the CBP provided data for the time period spanning Jan. 1 to Oct. 27.

The agency’s figures show all 18 breaches and attempted breaches occurred between Sept. 27 and Oct. 27, with none recorded during the nine months prior. But CBP officials and border agents have privately acknowledged repeated breaches and breaching attempts during that time span in the San Diego area, incidents that do not appear to have been tallied in the response to The Post’s FOIA request.

The CBP said the 18 incidents were a count of smuggling attempts that required the U.S. government to repair the structure and did not necessarily represent successful breaches that allowed narcotics or migrants to illegally enter the United States.

“Transnational criminal organizations are an adaptive adversary — regardless of materials, nothing is impenetrable if given unlimited time and tools,” according to a CBP statement released to The Post. The agency said that is why the U.S. Border Patrol is building a “border wall system that includes technology, roads, and an enforcement zone. Taken together, these capabilities maximize how long agents have to respond to attempted crossings — increasing the time they have from mere seconds to minutes, hours or even days depending on the adversary’s methods.”

The San Diego area has the most fortified barriers anywhere along the border with Mexico. Recently completed sections feature twin layers of steel bollard fencing as tall as 30 feet, with a paved road running between them that allows U.S. agents to quickly respond to scaling and breaching incidents.

The CBP statement further diminished the significance of the breaching attempts, saying the “border wall system’s” technology — sensors, cameras, and other hardware — is not yet fully operational in the San Diego area.

“When complete, San Diego Sector will have the most advanced border wall system USBP has ever deployed,” the agency said. “Until then, we continue to rely on existing situational awareness capabilities and manpower to mitigate potential breach attempts.”

Trump had initially envisioned a concrete wall along the border, but U.S. agents said the structure had to allow them to see through to the other side to monitor the activity there, which led to the six-inch square bollard design with anti-climb panels at the top. The president then approved and praised the bollard concept, which he referred to as “steel slats.”

Trump repeatedly touted the bollard fencing as impenetrable in rallies and speeches, until The Post reported that smugglers were climbing the 30-foot structure with improvised ladders and hacking at the bollards with “recip saws” and other commercially available power tools. The president has since backed down on those claims.

“You can cut through anything, in all fairness,” Trump acknowledged in a speech 24 hours later, on Nov. 3, insisting the barrier was designed to be easily repaired.

“You know cutting, cutting is one thing, but it’s easily fixed,” he said. “One of the reasons we did it the way we did it, it’s very easily fixed. You put the chunk back in.”

Border agents said sawing crews have learned to sever the bollards to create 14-inch openings, just enough for people and drugs to pass through. Because the bollards are so tall and heavy but are attached to one another only at the top, they are relatively easy to push out of the way once they are cut near their concrete anchors, lacking horizontal reinforcement, according to structural engineers.

Agents said the smugglers have learned to disguise the breaches with putty, potentially allowing them to return to the same breach and use it again and again until agents discover it. Some of the crews were so proficient in the technique that agents have learned to scan the surface of the bollards for cosmetic defects, dismounting from their vehicles to kick at the base of any bollards that appear they might have been sawed through.

Illegal crossings have plunged dramatically in recent months in areas where the soaring steel barriers have been added, according to Trump administration officials, though migration levels also have fallen in other border areas that don’t have new fencing. That is in large part because of a wider enforcement crackdown that has made it nearly impossible for asylum seekers to apply for humanitarian protection in the United States.

The Trump administration has cited the coronavirus pandemic threat to invoke emergency policies at the border that give CBP the ability to rapidly “expel” the vast majority of migrants, including asylum seekers and minors. Put into practice beginning March 21, the policies have pushed border crossings to near their lowest levels in decades.

Trump has pledged to complete approximately 450 miles of new barriers by the end of 2020, but the latest data shows that work crews are not on pace to meet that objective. The administration has completed 158 miles of new barrier as of April 10, adding about 60 new linear miles since the start of the year.

The project has continued despite the pandemic, over the objections of lawmakers who say construction crews are putting border communities at risk. They also have argued that the billions of dollars being spent on Trump’s border wall should instead be spent on the government’s pandemic response.

The Trump administration has obtained about $15 billion so far for new barrier construction, money that has mostly come through diverted Pentagon funds rather than congressional appropriations.

A group of 66 representatives and 25 senators — all Democrats — sent a letter to Trump officials on Wednesday calling for the suspension of border wall construction during the coronavirus outbreak.

“We should be using all resources and funding to combat this virus and protect Americans, instead of using critical funding and resources to continue the construction of a border wall,” the lawmakers wrote. “The construction of a wall puts workers, law enforcement personnel, and border residents in immediate danger.”

Nearly all of the 158 miles of new barriers completed as of April 10 are in areas where the new design is replacing smaller, older fencing. Just two miles of new fencing has been added to areas that previously had no structure whatsoever, according to the latest construction figures from CBP and the U.S. Army Corps of Engineers, which oversees the project.