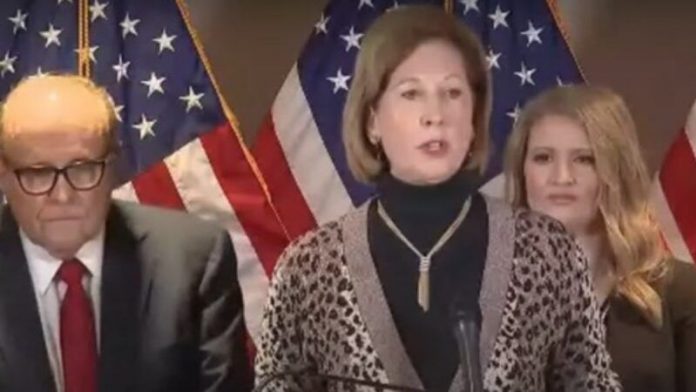 Dominion Voting Systems on Friday filed a defamation lawsuit against lawyer Sidney Powell, demanding more than $1.3 billion in damages for the havoc it says Powell has caused by spreading “wild” and “demonstrably false” allegations, including that Dominion played a central role in a fantastical scheme to steal the 2020 election from President Trump.

For weeks, Powell has claimed that Dominion was established with communist money in Venezuela to enable ballot-stuffing and other vote manipulation and that those abilities were harnessed to rig the election for former vice president Joe Biden. Her claims — though rejected by multiple judges and election officials — have gained traction with many right-wing voters and with Trump himself.

In a 124-page complaint filed in the U.S. District Court for the District of Columbia, Dominion said its reputation and resale value have been deeply damaged by a “viral disinformation campaign” that Powell mounted “to financially enrich herself, to raise her public profile, and to ingratiate herself to Donald Trump.” The defendants named in the lawsuit include Powell, her law firm, and Defending the Republic, the organization she set up to solicit donations to support her election-related litigation.

In an interview, Dominion CEO John Poulos said the lawsuit aims to clear his company’s name through a full airing of the facts about the 2020 election.

Poulos said he would like the case to go to trial rather than settle.

“We feel that it’s important for the entire electoral process,” he said. “The allegations, I know they were lobbed against us . . . but the impacts go so far beyond us.”

L. Lin Wood, a lawyer who has worked alongside Powell on post-election lawsuits and who says he is representing her in connection to defamation matters, called the lawsuit an attempt “to censor speech or try to intimidate people from telling the truth.”

“I haven’t seen the lawsuit, but I don’t have any concerns about Dominion,” he said in an interview.

As Powell’s accusations about Dominion spread after the election, the company’s employees were stalked, harassed and received death threats via email, text, and phone: “we are already watching you,” read a text message to one Dominion employee, according to the complaint. “Come clean and you will live.”

The company says it has spent more than $565,000 on protection for personnel since the election.

Dominion has sent retraction demands or document preservation letters, often precursors to litigation, to more than 20 individuals and entities, including to Wood, White House Counsel Pat Cipollone and Trump’s personal attorney, Rudolph W. Giuliani; and to Fox News, Newsmax, One America News and the Epoch Times, media companies that have lent Powell an enormous platform in the two months since the election.

Some of the news outlets, including Fox, have since backed off the claims or issued corrective statements.

Thomas A. Clare, an attorney representing Dominion who is well-known for litigating defamation cases, said his team filed against Powell first “because she’s been the most prolific and in many ways has been the originator of these false statements.”

“But to be clear, none of this would have been possible without other individuals and without other media outlets that have their own responsibility,” Clare said. “And we’re looking at all of them.”

Asked whether Dominion intends to sue Trump, Clare said no one has been ruled out. “We’re going to follow this wherever the evidence leads us.”

In the complaint filed Friday, Dominion chronicles more than three dozen of Powell’s public statements about the company, showing how she continued attacking it even after multiple local, state, and federal officials rejected claims of widespread election fraud.

She has claimed that Dominion’s voting system was created in Venezuela to rig elections for former Venezuelan leader Hugo Chávez and has said that secret algorithms in Dominion machines were used to manipulate votes in favor of Biden in 2020. She has accused the company of bribing Georgia officials to win a no-bid contract with the state. She has promised to tweet a video of Dominion’s founder — Poulos — saying he could “change a million votes, no problem at all.”

No such video ever materialized.

Dominion’s lawsuit cites “mountains of the evidence conclusively disproving Powell’s vote-manipulation claims.” While many pages of the complaint are devoted to dissecting and rebutting those claims, the company notes in particular that hand counts — including a statewide hand count of millions of ballots in Georgia — have confirmed that Dominion machines tabulated votes accurately.

Dominion sent Powell a letter on Dec. 16 demanding that she retract her “wild, knowingly baseless, and false accusations.” Four days later, Powell wrote on Twitter that she was “retracting nothing.”

“We have #evidence,” she wrote. “They are #fraud masters!”

Since then, Powell has continued accusing Dominion of wrongdoing, including in a Jan. 3 tweet claiming that thousands of votes in Georgia were switched from Trump to Biden.

The complaint filed Friday accuses Powell of breaking state defamation laws in Georgia, where she spoke at a “Stop the Steal” rally in December, and in the District of Columbia, where she appeared at a November news conference and has given multiple interviews from the Trump International Hotel. It also alleges that she engaged in deceptive trade practices by using false statements about Dominion to raise her public profile, gain clients, and sell more copies of a book she wrote in 2014.

The lawsuit, which seeks both compensatory and punitive damages, is based on Powell’s statements to the public and the media rather than on the allegations she made in federal lawsuits she filed seeking to overturn election results in four battleground states. But Powell’s actions in those cases — popularly known as the “Kraken” suits, after a mythological sea-creature that Powell has adopted as a mascot — are under separate legal scrutiny.

On Tuesday, the city of Detroit asked a federal judge in Michigan to punish Powell and her team of lawyers, including Wood, for using the courts to put forth “false and frivolous claims while seeking relief with massive implications for our democracy.”

Powell’s lawsuit in Michigan was “full of intentional lies” and baseless accusations, and the Dominion-related conspiracy theory was “perhaps the most baseless,” Detroit’s lawyers wrote in a 56-page motion for sanctions.

They asked Judge Linda V. Parker of the U.S. District Court for the Eastern District of Michigan to refer Powell and her team of lawyers to the court’s chief judge for disbarment and to refer them for further professional discipline to authorities in their homes states — Texas, in Powell’s case.

Detroit also asked the judge to levy a financial penalty “sufficient to deter future misconduct,” at least equal to the amount of money that Powell and her team have raised to fund their post-election lawsuits.

Wood said Friday that he had not seen Detroit’s motion but believed it was politically motivated. “On the face of it, I’d call it nonsense,” he said.

Parker, who will decide how to handle the request, is the same judge who heard Powell’s Kraken lawsuit in December. She dismissed it, finding that the allegations were “nothing but speculation and conjecture.”

Powell has appealed to the U.S. Supreme Court.