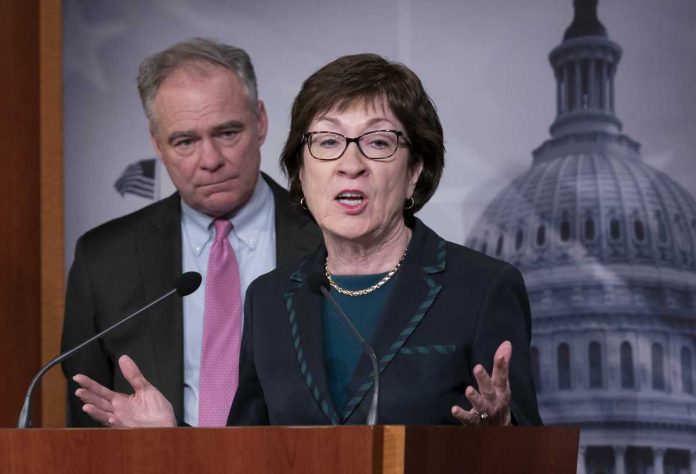 Senators are discussing a potential censure resolution against former President Trump as it becomes increasingly clear that his second impeachment trial is likely to end in acquittal.

A spokesperson for Sen. Tim Kaine (D-Va.) confirmed that he is discussing the issue with GOP Sen. Susan Collins (R-Maine), as well as with his Senate colleagues more broadly.

Axios first reported on Tuesday Kaine and Collins were pitching their colleagues on the idea of a censure resolution. Spokespeople for Collins didn’t immediately respond to a request for comment about the conversations.

“I think it’s pretty obvious from the vote today, that it is extraordinarily unlikely that the President will be convicted. Just do the math,” she said.

Lawmakers have been floating other options besides, or in addition, to impeachment for weeks, after he urged his supporters to march to the Capitol and repeated false claims that the election was “rigged. A mob subsequently breached the building, where then-Vice President Pence and members of Congress were counting the Electoral College vote.

Kaine is also among a group of Democrats who are floating trying to bar Trump from future office through the 14th Amendment. That, like a censure resolution, could pass the Senate with only 60 votes compared to impeachment’s two-thirds requirement. That means if every Democrat voted for a censure resolution they would need the support of at least 10 Senate Republicans.

A group of House Republicans introduced a censure resolution earlier this month condemning Trump “for trying to unlawfully overturn the 2020 Presidential election and violating his oath of office on January 6, 2021.”

But House Democrats publicly rejected it arguing that it didn’t go for enough to hold Trump accountable for the Capitol attack. The House, instead, voted on a bipartisan basis to impeach Trump, making him the first president to be impeached twice.

But it appears increasingly likely that Republicans will hand him his second acquittal with several members of the caucus predicting Tuesday’s vote on the effort by Paul foreshadows what the outcome of the trial is likely to be.

“I can’t see how you get 17. I think that that was a test vote,” said Sen. John Boozman (R-Ark.) told The Hill after 44 GOP senators sided with Paul.