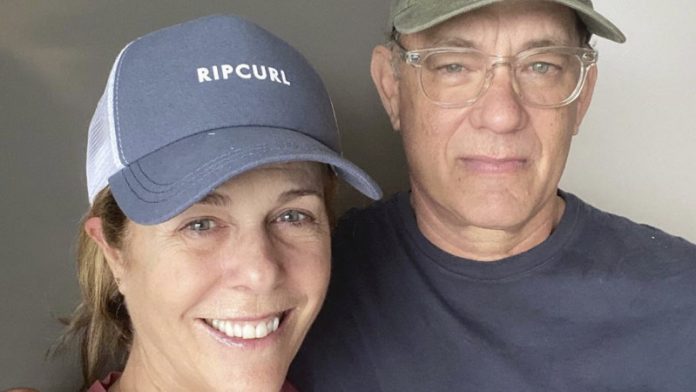 In December, she revealed she still had antibodies for COVID-19, almost nine months after she recovered from it.

And nearly two months later, Rita Wilson revealed she no longer has the antibodies.

The 64-year-old singer/actress, who battled COVID-19 in March 2020, spoke about it on Monday while on The Ellen DeGeneres Show.

In the video interview, Ellen said that while she just got over COVID herself, Rita and husband Tom Hanks, also 64, got it ‘early on.’

When asked if they were getting calls for advice, she said: ‘Well yeah and you kind of feel superhero-like and superhuman because you have the antibodies and you feel like you can go places and do things except nobody else can go anywhere and do anything.’

But yes, we got a lot of calls and it was actually really lovely to hear from people. And I know we talked when you had it. And it’s horrible to have it. Hopefully, now the vaccine’s going to be out there and people can get it, and we can get back to normal life soon.’

Ellen noted that when you have the virus, ‘people are scared of you and they run away.’

Rita said that when she and Tom had it, ‘we were so early on in getting it that we were completely isolated and we didn’t see anybody. It was just us. And sometimes he scared me, so I did run away,’ she joked.

Ellen asked if she has been tested recently for antibodies, which Rita said she was, and that in fact does not have anymore.

Rita and Tom both contracted and then recovered from COVID-19 in March while they were in Australia for work; they were told at the time they have gotten the disease while in the US or in transit to Australia – not in Australia.

Per The Hollywood Reporter, at the time of their diagnosis, newly reported infections in Australia were non-contact cases and they had the virus for at least one week prior to the confirmation it was COVID-19.

According to the outlet, at the time, there were only 130 cases in the country.

She revealed on Jimmy Kimmel Live in early December during an interview that she still had antibodies and gets tested through a UCLA program for antibodies for a study.

When she had COVID, the star recalled she felt ‘very tired, extremely achy, felt uncomfortable, didn’t want to be touched,’ adding that she had a fever that hit 102 degrees by day nine, with chills and a loss of taste and smell.

During her Ellen interview, she also spoke about her father, who chose the last name Wilson after picking it off of a street sign.

‘The name I was born with was Margarita Ibrahimoff, which I think sounds like a fantastic Bulgarian gymnast but he was tired of people asking him how do you spell the name, how do you pronounce it? And so he picked Wilson because he knew that no one would ever ask him how to spell Wilson.’